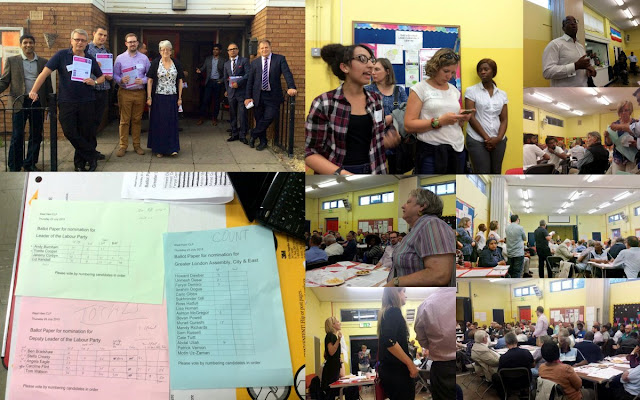 It was one of the largest West Ham meetings (122 members) I have attended and took place in the Vicarage Lane Community centre in my ward. All members were invited to give speeches and make nominations. I think probably a fifth of those present spoke including young and new members. The speeches were often quite passionate and waiting for the results was tense and rather exciting.  Everyone behaved themselves (even Red Tel) and  I think we did our CLP proud.

As a Party member I nominated Andy Burnham for leader and spoke in favour of Stella Creasy for Deputy. As a UNISON delegate I nominated Murad Qureshi for the GLA seat who has the support of Greater London UNISON.

Afterwards there was food and the traditional Labour Party raffle. When everything was cleared up a few die-hards went down to the Black Lion to further analyse in detail the results and debate the merits (or otherwise) of candidates.
Posted by John Gray at Monday, July 27, 2015