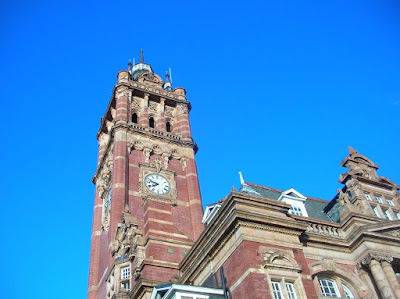 My emergency questions as a Newham Councillor were ruled out of order by the Chair of Council at tonight's Full Council meeting.

I had been told by the Newham Chief Executive via email that the reason for this is that the Chair did not deem them to be urgent business.

At the meeting I raised a point of order and asked the Chair for further clarification on why she had deemed it not to be urgent, since it had been asserted by Channel 4 last week that Newham was spending at least £1 million per month in excess interest payments.

Also my second question had been about a possible positive and constructive solution to the matter.

The Chair replied that the Council did not want to respond to my questions since they had had serious concerns about the Channel 4 programme and had made a complaint against it and were awaiting a response.

I responded that this was a different explanation than that sent to me today and I looked forward to receiving this explanation in writing.

The Chair agreed to do this although the Chief Executive did then say she was not obliged to give reasons for this other than it was not considered to be urgent.

The meeting had started at 7pm and finished at 7.16pm

My Questions ruled out of order

"I would be grateful if you could ask the Chair of Council to accept the following emergency questions under procedure rule 23.3 regarding Agenda item 14.

1. Will the Mayor and / or Cabinet Member for Finance refer the matter of Newham's LOBOs and toxic loans to Overview and Scrutiny, as was done over the East Ham Campus overspend and Ultra Vires, so that an full, independent and extensive investigation can be conducted?

2. Legal experts in the finance sector have made it clear that there is scope for the Local Authorities affected by the LOBOs scandal to mount a joint action against the Banks so that the LOBO liabilities are declared mis-sold and / or Ultra Vires, and consequently set aside. Will the Mayor and Cabinet Member for Finance support such action and join an alliance of other councils to sue the banks so that Newham residents, both current and future, aren't lumbered with toxic debt for decades to come?

I will be re-submitting these questions to the next Council meeting in September.

(Update: Cllr Rokhsana Fiaz Emergecny questions were also ruled out of order for the same reasons. I have posted these questions here)