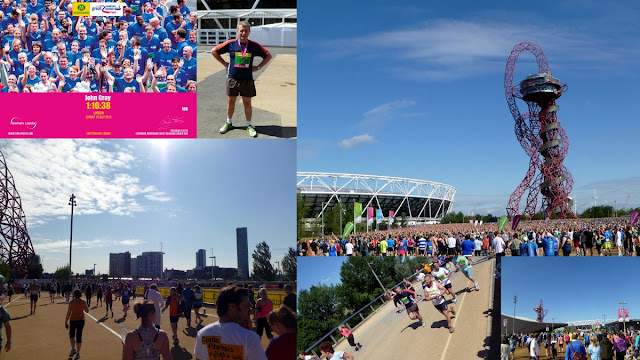 Off message-ish but last Sunday (19 July) I took part in the first Great Newham Run 10k in the Queen Elizabeth Park. I have also taken part in the Great North Run in Newcastle and the Great South Run in Portsmouth.

For I think the fifth year in a row, I took part in a running (or rather in my case - a jogging very slowly) event in Newham. The weather was warm but there was a very welcome cooling breeze. It seemed well organised apart from huge queues for the portable toilets at the start.

I was in the Green wave which started off just after 10am near the ArcelorMittal Orbit. Running legend and founder of the Great North Run, Brendan Foster, set us off. The route was around the Olympic park and went past all the iconic Olympic 2012 sports stadiums that are still standing - the main stadium, the Aquatics centre and the Velodrome. The park is also a mass of canals and beautiful green spaces.

During the final 300m you are in the Olympic Stadium itself and running along the track to the finish line which is great thrill.

The run itself was a great experience. The big downside was that I didn't see very many Newham residents taking part. We were identified on our number bib. Despite being host to the Olympics in 2212, Newham also has the most "inactive" adults in the country. Is this because we have very little organised youth work provision in the Borough?

There was also a distant lack of black runners taking part. Newham and the boroughs that surround the Park are amongst the most ethically diverse in the country.  While I love Queen Elizabeth Park, I often think it has become a middle class playground and local Newham residents for whatever reason are excluded. Something to work upon I think.
Posted by John Gray at Saturday, July 25, 2015