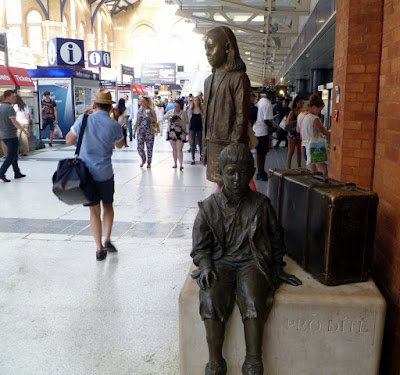 On the way back home on Saturday from the UNISON Labour Link forum in Manchester, I went through London Liverpool Street Railway station.

At the station I passed the statues of the "Kindertransport" children who were rescued from Nazi Europe and arrived in this same station just before the Second World War.

Early Thursday morning in Manchester while out jogging along the River Irwell, I had heard about the death and great life of Sir Nicholas Winton aged 106 on radio 4.

Nicholas Winton had helped organise the transport to safety in the UK of over 600 Czech children from almost certain death in 1938-39. There were a number of different "Kindertransport" rescue missions. Most were Jewish but some were also the children of socialist and communist opponents of the Nazi.

His story is incredible and inspiring. He didn't think he was doing anything special and that anyone would have done the same as him if they could.  It goes to show that matters of principle and of doing the right thing matters. No matter how difficult, demanding and sometimes dangerous.

If you commute in and out of London via Liverpool Street, give these statues a gentle pat on the back as you go by. Be prepared also to support modern day Nicholas Winton's who may be trying even now to get children to safety from extermination in modern day Syria or Iraq.
Posted by John Gray at Monday, July 06, 2015