"Keeping wages down for ever" – A new slogan for the Tories? 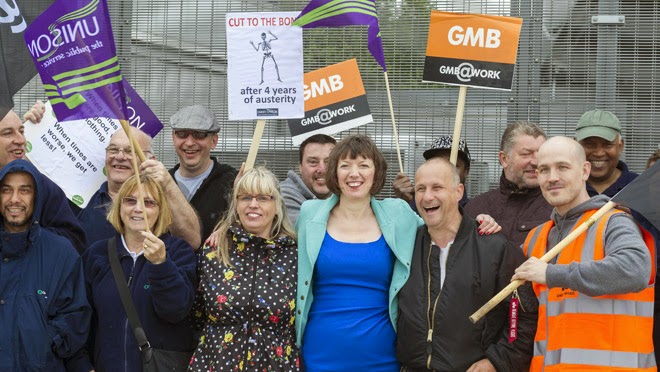 Great post from TUC General Secretary Frances O'Grady on Touchstone. "The TUC’s Congress starts in Liverpool today, and an issue at the top of many minds will be the threat posed by the Conservative Party’s new proposals on strike ballots.

These are not just a few bureaucratic obstacles that will make life a bit more difficult for trade unions. Rather they work together to make official strikes close to impossible and will open up trade union activists to increased surveillance by the state.

The Conservative proposals are three-fold.

First they want to impose a turnout threshold of 50% on strike action, in a ballot conducted by postal votes. This is a level that has never been met in elections as important as that for the London Mayor. It is an irrational barrier too as a 49% vote for action with none against would be invalid, while a narrow 26% to 25% victory for action would be legal. It actually makes an abstention more powerful than a vote against, which rather undermines their stated rationale of increasing turnouts.
Union elections are governed by old legislation introduced when the post was our main means of distance communication. Now most mail is junk mail or bills, and life for many has moved online and onto smartphones, making a 50% target even more difficult. For sure give people a chance to vote by post, but do not keep denying the right of union members to vote securely and secretly online.

Secondly, the Conservative proposals impose many new duties on unions on the conduct of ballots and communications with members. It’s of course good practice to communicate properly – and members are smart enough to tell when you are not. But as soon as you start to set it out in law, in practice all you are doing is giving employers many new ways of challenging ballots in the courts on technicalities.

Thirdly, they want new specific criminal offences for people on picket lines. There are already strong public order laws in the UK and I have no sense that the police want anything extra. Yet the Conservatives are proposing that if a seventh person joins a peaceful and good-natured picket line, all seven could be prosecuted and given a criminal record.

And new specific technology offences will mean strikers will face tougher legal restrictions on Twitter than other people. They will open up union activists to enhanced surveillance as potential criminals.

In drawing up these proposals, they seem to have ignored their stated question of “how can we improve turnout in strike ballots?”, and instead asked “how can we stop strikes, intimidate staff and help bad bosses?”

Strikes would become so difficult that there would be no effective right to strike in the UK. Yet the right to freedom of association is a fundamental human right. That includes the right to form effective trade unions. Dictatorships and authoritarian regimes routinely suppress trade unions and lock up strikers – That’s surely not how we want to run our own society.
But if even that is not a sufficient reason, let’s look at what an effective ban on official strikes would mean for the workforce.

Politicians often say that the alternative to strikes is talking, but there is a difference between talking and negotiating. You only get real negotiation when there is power on both sides of the table. Collective bargaining works because both sides understand what the other can realistically deliver. This is why the vast majority of genuine negotiations don’t result in strikes but an eventual deal between management and workers.

But take away the right to official strike and one of two things happens. Either workers end up meekly asking their employer for more, with as much power as Oliver Twist brought to the negotiating table. Or you see an increase in hard-to-manage and destabilising unofficial action, whether wildcat strikes or mass duvet days.

I have seen no polls that suggest the public think strikes and unions are a concern. Economic commentators don’t point to unions as part of the problem, but are more likely to see them as part of the solution to a society in which inequality has grown and wages stagnated. Conservative MPs have told me in private they see no need for such measures. Perhaps it appeals to funders or potential UKIP defectors, but it won’t win votes.

This is an attack on our fundamental civil liberties, but it will also act to lower living standards for the many – whether or not they are union members. With these new proposals, the Conservatives seem to found have a simple slogan for the next election – “Keeping wages down for ever”.
Posted by John Gray at Monday, September 08, 2014