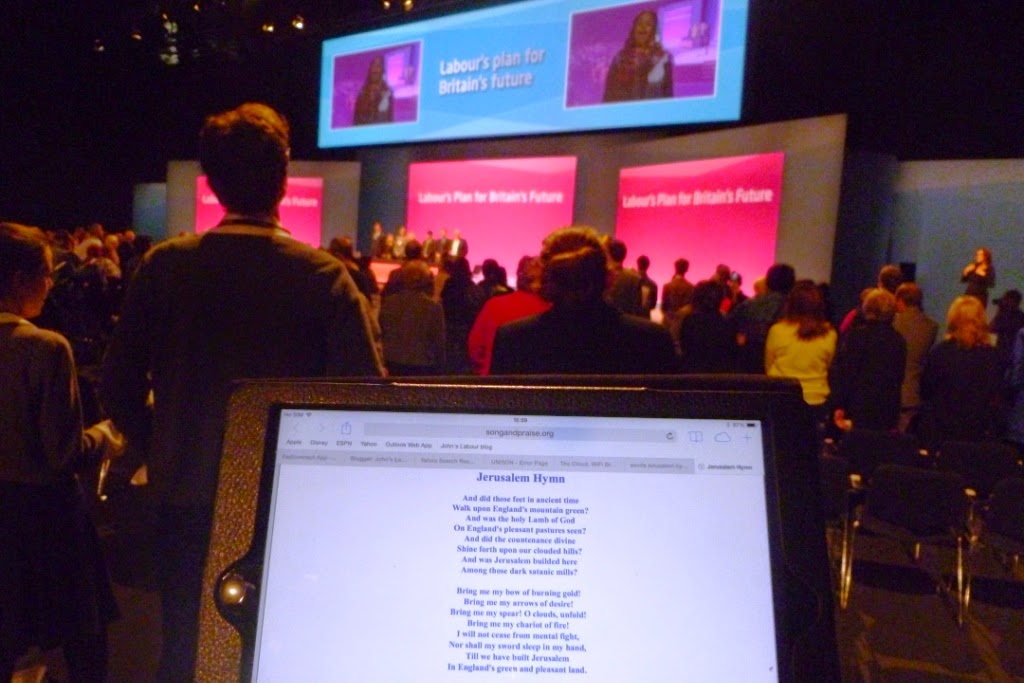 On the train back to the "Smoke" after 5 days away at this year's Labour Conference in Manchester.

I was not a delegate and went in my "ex-officio" capacity as a Councillor. This meant I could have a late start (no early morning delegation meetings) and go for a jog in the morning to clear the head around the lovely city centre canals.

Best of all I could pick and choose which parts of conference business I wanted to see and also go to the fringes that took my fancy.

I'll post on some of the fringes and debates I attended during the next few days.

I must admit that I thought the conference was a little flat considering we are only 7 months away from a General election but the reason was I think that many in the Party were still knackered after the Scottish referendum.

Politically I think it went very well, the Party is united and determined to get rid of the Tories next May. While I think we ought to have gone further on a number of policies and announcements, we have enough to win and "win big" as guest international speaker, New York Mayor, Bill De Blasio, put it so effectively today.

I'll post more on Ed's speech but it passed the grayee litmus test (I rang my Mum who watched it on the telly and she said he came over well.).

Hello comrade , I picked up a Jonathan slater by Euston station and took him to Lewisham where he is a counsellor , soon as he mentioned Labour link And housing know he would know you lol. All the best matey speak soon .

Jon is a good Labour man and trade unionist.

It is also good to be reminded we have proper radical socialist Black taxi Cabbies in London!

Must meet up for a beer or three with Monty!

Hi Comrade .
most London Cabbies can't wait for Boris to piss off else where lol , yes let's meet up soon mate with the Mont lol .