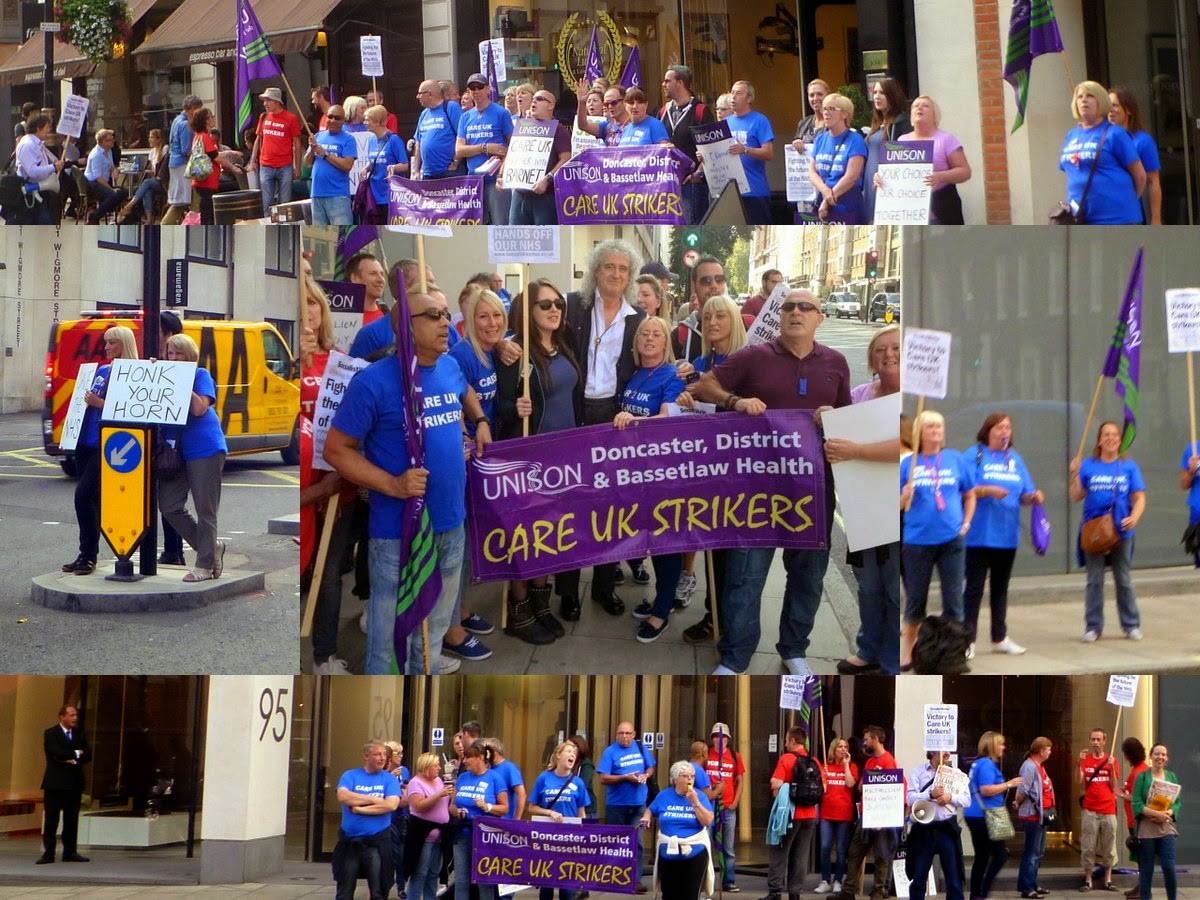 This lunchtime I went to support Care UK strikers from Doncaster outside their real employer's headquarters at Bridgepoint Private Equity,  95 Wigmore Street, London, W1. I had just missed seeing Rock legend, Dr Brian May from the band "Queen" at the protest (see centre picture).

Apparently Brian had been driving past and saw the protest. Check out this report on FaceBook from one of the strikers "So just in London striking and Brian May of Queen walks over to me gives me a hug and says well done for what we are doing.... Absolutely gobsmacked"

Brian May tweeted  "Guys from Doncaster protesting destruction of NHS by Cameron. They are RIGHT. BBC shamefully not reporting this. Bri".

The Doncaster Care UK/Bridgepoint Private Equity protesters have suffered massive pay cuts since they were transferred from the NHS to Care UK. One striker I spoke to is losing £400 per month in wage cuts. Other strikers are new staff who want Care UK/Bridgepoint to pay them the UK Living Wage rate. They are now on their 63rd day of strike action. This is turning into one of the longest disputes in social care ever in the UK.

I understand that Private Equity investor Bridgepoint has huge investments in Personal and Social Care in the UK. This sector is a massive risk to Bridgepoint investors. Imagine what would happen to your reputation and investments if there was yet another social care scandal at a project they had recently taken over and got rid of experienced staff and replaced them with untrained and inexperienced workers on minimum wage and zero hour contracts?

Also with them were strikers from Your Choice Barnet ("YCB" in red tee shirts) who are on their 2nd day of strike action over pay cuts.  They also look after disabled children and adults and Tory Barnet Council is planning to cut their wages by an average 10%. The Doncaster strikers had shown them solidarity at thier picket line that morning and they were showing their support in return.
Posted by John Gray at Tuesday, September 09, 2014