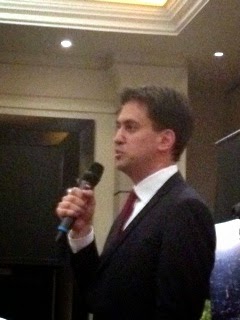 This is a late post but my excuse is that it was really busy during and since I returned from Labour Party Conference in Manchester. Hopefully I can catch up on post on events soon.

Picture of our Labour Leader, Ed Miliband, addressing the London regional reception at Conference a week ago.

This was a ticket only packed event. Shadow London Minister Sidiq Khan MP was the host.

I had a serious conversation with Gary Kent, the Director of the all-party parliamentary group on the Kurdistan Region in Iraq on the threat from the ISIL fascists. A brave man.

There was good news from a major British property company that they will be announcing soon that they will make sure that all their directly employed and contracting staff are paid a living wage!

Ed himself was very relaxed and confident when he came to speak (the first of many times during Conference that I was to hear him in similar events). He started off with the traditional joke that the London Labour reception was his real, real favourite over all the other receptions but we should not tell anyone else this!

He also told this joke (which I was also to hear again) that as he came out of the Eastern region reception today, he was stopped by a female delegate who said "What a marvellous speech today". He replied by saying "Well, thank you very much". She said "not you but your wife Justine's speech during the women's conference today. She was marvellous".