Solidarity with Scotland: Vote No since We are all Better Together 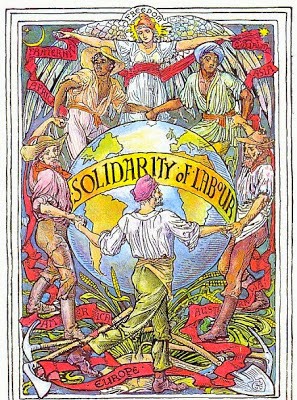 This beautiful illustration by the 19th Century socialist artist, Walter Crane, is about international Labour solidarity (not the UK Labour Party). However it symbolises to me why I believe that it will be a defeat for working people and wider progressive politics, if Scotland votes for separation. Nationalism is incompatible with such solidarity in my view. No matter how well intentioned

To be clear, this will not be the end of the world for Scotland or the rest of the UK if there is a Yes Vote today. While I would be personally heart broken if it happens, I will get over it and life will move on. Despite the myths, the Labour Party can win general elections without the Scottish vote (only twice in 100 years have they been needed). Neither will Scotland become immediately bankrupt nor descend into some rabid extreme nationalist state. This will not happen.

Yet these are some of my fears: -

I do think that the biggest beneficiaries of separation will be big business who will use our internal divisions for a race to the bottom and further drive down fair taxation, decent wages and employment rights.

I don't actually believe that any country can really be independent if it has no meaningful control or influence over its currency.

Jobs in the Scottish financial services industry will be hard hit. Tonight by co-incidence I was at a London Pension committee and three of our fund managers/advisers had flown in from Scotland to give presentations. I wonder how many we will see if there is independence and relocation to England?

I suspect that if there was independence, that the SNP will fall apart since they are a messy coalition who would have achieved their raison d'etre.  The Scottish Tories could then gradually reclaim their political dominance in Scotland. Read your history books. It is no coincidence in my view that the Tories use to have majority support in Scotland before the rise of the SNP.

As someone who has lived in Scotland and experienced middle class "Morningside Edinburgh", I don't think that the Scottish Establishment will be that much better than London if they have full powers.

You are not going to do very much about getting rid of nuclear weapons either if they (and I have my doubts this would happen in practice) are simply relocated to Northern England or Wales.

Being Scots/Welsh I am deeply worried that the genie of English nationalism will be let loose and 54 million English will dominate the 5.3 million in Scotland and the 3.1 million in Wales without the checks and balances of an union.

Finally, I think this quote is important even though he has decided not to participate in this referendum. "I grew up in the shipyards and docks and have always remembered that I have much more in common with a welder from Liverpool than I do with an agricultural guy from the highlands.... I have never been a nationalist" Billy Connolly.  Nuff said?
Posted by John Gray at Thursday, September 18, 2014