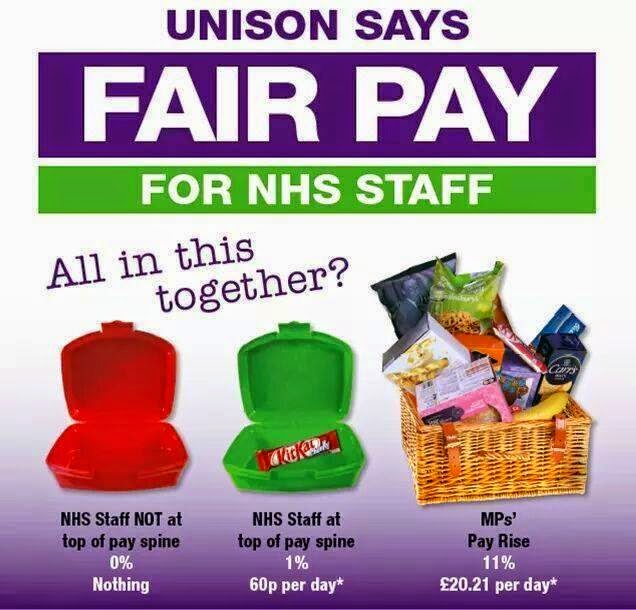 Pay in the NHS has not kept in line with inflation and staff have not received an above-inflation pay rise since 2009.


NHS workers in England are under paid

This year 60% of NHS staff will not get any pay rise and only those at the top of their bands will receive a 1% unconsolidated lump sum. The 1% unconsolidated lump sum is a one-off payment which does not alter the hourly rate, so it will not count towards unsocial hours for evening, weekend or night shifts, it will not be added to overtime, it will not be added to any supplements (such as high cost area supplements, local recruitment and retention premia, or on-call arrangements) and it does not count towards pensionable pay.

UNISON’s healthcare service group executive has agreed to ballot members in England on pay for strike action and action short of strike action.

The ballot will open on 28 August 2014 and close at 10am on 18 September 2014. Members will vote on strike action and action short of strike.

If members vote ‘yes’, it is proposed that members will take action during a week in October. This is likely to start with a short stoppage followed by a defined form of action short of strike, such as insisting that members take their breaks.

Members will be sent a ballot paper with questions asking whether they are prepared to take strike action and/or action short of strike action.

We are urging members to vote yes for both strike action and action short of strike. However, we are also urging all members, whatever their view, to vote to ensure we have a high ballot turn out".
Posted by John Gray at Friday, September 05, 2014