Why Union £ is the cleanest in politics : Moonlighting MPs - the politicians with second jobs in financial services 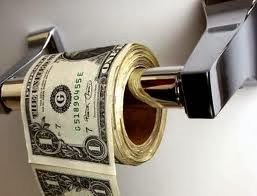 From Money Marketing: This is so, so wrong. Hat tip Gregg McClymont MP.

"The revolving door of former FCA regulators joining banks and accountancy firms has created understandable hostlilty from advisers but it is also worth taking a look at the MPs with commercial interests associated with financial services.

Every MP working in financial services is a Conservative with some working up to nine hours a week and earning hundreds of thousands of pounds in outside income.

All data is published on the House of Commons’ register of members’ financial interests and only includes regular remunerated employment for financial services firms:

Former Tory chief whip Andrew Mitchell has been hired by Investec as a senior strategic adviser earning £60,000 a year for 10 days work. Alongside serving as an MP for Sutton Coldfield, Mitchell will work almost a day a month for the bank.

Until 3 December 2012, he was non-executive director and chairman of London Life Limited and Phoenix Pensions. "Until 7 August 2013 I was also non-executive director and chairman of NPI".
On the register of members’ interests, Evans says: “These companies are long established life assurance and pensions companies, closed to new business and now owned by Phoenix Group (formerly Pearl Group) of which I was group chairman from 2005 to 2009.”

MP for Cities of London and Westminster Mark Field
Mark Field works as an adviser to Cains Advocates, an international law firm, assisting with its international strategy, ambassadorial work and advising on Government and parliamentary aspects of financial services.He is paid around £40,000 a year for approximately 10 hours a month work.

MP for North East Somerset Jacob Rees-Mogg
Jacob Rees-Mogg is director of investment management firm Somerset Capital Management LLP.
He was paid around £134,400 in the last year for 35 hours a month work at the firm.

Investec has hired Andrew Micthell for £60,000 a year for 10 days week. The former Chief Whip was forced to quit the cabinet last year after he was accused of swearing at a policeman and calling them “plebs”.

MP for Mid Sussex Nicholas Soames
Nicholas Soames is a senior adviser on insurance and related financial services to insurance broker and risk advisers, Marsh Group .He attends meetings and advises on business opportunities and earns £92,880 a year for 15 hours a month.

MP for Tonbridge and Malling Sir John Stanley
Sir John Stanley is a consultant on financial services to Fidelity, attending meetings as necessary and advising on business opportunities and risks.He earns £21,600 a year for between five and eight hours per month.

MP for Louth and Horncastle Sir Peter Tapsell
Peter Tapsell is an international adviser to the Mitsubishi UFJ Trust and Banking Corporation (Japan); a Japanese Trust Bank in both Japan and overseas.He earns £30,000 a year, paid semi-annually, for around 10 hours work a month.

MP for Rochford and Southend James Duddridge
James Duddrige is an adviser on strategy and business development to  Wilcocks & Associates, a financial planning firm in Liverpool. Duddridge receives £6,000 a year for an expected commitment of approximately one day per month.
Posted by John Gray at Monday, October 28, 2013