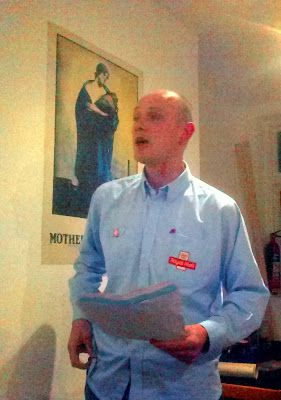 At our monthly West Ham Labour Party General Committee meeting last Thursday evening, we had Ryan Ward as our guest speaker. Ryan is a steward for the union CWU and has been a postal worker for the last 25 years. He had been up since 4.30am that morning.

Ryan spoke about the privatisation of Royal Mail and the strike to defend pay and conditions on Monday 4 November.

He criticised the luke warm support & private briefings against the CWU from some senior Labour figures compared with the grass root support shown at the Party conference last month.

The Sun (which Ryan regrets is read by some postal workers) has reported that Royal mail staff will pocket £3,000 in shares then go on strike. The truth is that they will not get any shares for at least 3 years! They will also lose the shares if they strike.

Royal Mail has not had a national strike for 3 years and the average pay is around £300 per week with little chance of overtime.  His partner also works for Royal Mail for similar money. Most of his wage is taken up with rent to a private landlord and on the rest they have to bring up 3 children.

He asked Party members to go to the picket line on November 4th to show support. Following this West Ham CLP TULO officer (and UNISON NEC member), Kim Silver, thanked Ryan for explaining about the dispute and offering the support of local members and trade unions. Party activists are also planning to hold stalls in Stratford High Street to support the dispute. Ryan was pleased with Kim's statement and said it was not often you got such support nowadays for this sort of action.

In the Q&A that followed Ryan criticised Chuka Umunna MP for ducking out of a question on TV  whether Labour would re-nationalise Royal Mail if they won office. He thought that a commitment would have helped put off investors. He answered a question about what the CWU realistically expected from strike action by pointing out that the strike was about pay and conditions and that privitisation is not inevitable. Railtrack is now publicly owned again.

I made the same point to Ryan that I made to Andy Burnham MP the night before (see link) that we need to make the case for public ownership and the public sector ethos. Private companies are good at making things such as cars or smart phones but they are rubbish at running natural monopolies such as Royal Mail or health services such as hospitals.

After Ryan spoke we later had our MP Lyn Brown give her Parliamentary report (this is private and confidential). Lyn  was congratulated at the meeting for her recent appointment as a Shadow Minister for Communities and Local Government.


Later I noticed this tweet from West Ham ward member and 2014 Forest Gate North Labour Candidate, Seyi Akiwowo, ‏"A lot of love in this room tonight for Ryan and his colleagues at Royal Mail @ WestHamLabour GC".
Posted by John Gray at Sunday, October 27, 2013

When was the last time you posted a letter?. It costs around 60pence for a stamp. Add to that the confusion surrounding small letters and large letters. Big packets and little ones. The Royal Mail is in a declining market. People are not posting letters.

If I want to send a Parcel, it is cheaper to send it via Yodel or Hermes. There are shops in Newham, you just drop your packet. No hassle waiting in the post office and ideal as many of these shops are open until 10pm. (www.parcel2go.com)

Utilities charge more for a 'paper bill' and free for a paperless billing.

The people at the Royal Mail need to recognise the market is shrinking market and at the same time, the price of posting has gone up.

Yesterday actually, and it was in a big envelope! Not very tricky to work out.

The Royal Mail in my experience is also the only reliable service to deliver products that I buy over the internet. All the couriers are pretty useless and I normally have to go as far as Barking to pick them up.

If Royal Mail has no future then why is the current share price so high? (and why were taxpayers cheated while Tory financial advisers got massive fees for mispricing market?)