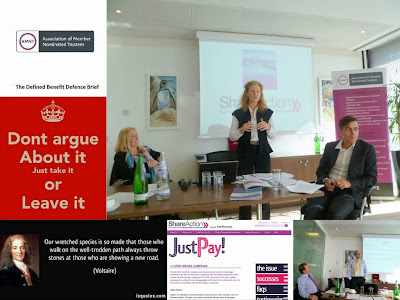 Photo college is from the recent open meeting of the Association of Member Nominated Trustees.

The first agenda item was a presentation on "DB Schemes: Solvent Employer, wind-up or buyout" with AMNT Executive member Robin Bell and Louise Inward from our hosts at the Pension Insurance Corporation. Which used the Pension Regulator "On line" trustee toolkit to work out the problems and pitfalls facing a DB scheme in trouble.

Next was Joint Chair, Janice Turner who briefed everyone about current AMNT activities. Our membership has continued to grow. We have made significant contributions to government and regulatory policy on pensions and trusteeship. We have held successful and well attended open meetings and make our presence known by speaking in conferences and writing articles for the pension press.

We have been successful in our fund raising and have now employed an administrator, Kate Bendy, on a part time basis to support the AMNT objectives and our volunteer executive committee.

Pension Minister Steve Webb MP, was our keynote speaker and took part in a Q&A at our Summer Conference. Ewan McGaughey, a researcher from the London School of Economics, at the summer conference described the AMNT as “unique” and “the most important development in Pension Governance in 50 years”

The picture of our other Vice Chair of the AMNT, “Red” Barry Parr, was on the front cover of July 2013 “Pensions Insight” magazine. Janice also mentioned my award as “Most influential Trustee” at the Mallowstreet Awards September 2013.

Next I spoke to the meeting about the latest updated edition of our hard hitting AMNT "Defend DB schemes" guide which all trustees whose sponsor wants to close their schemes either to new members or future accrual should consider. We also offer our members individual advice and support if they are going thorough this process. Modern defined benefit pension schemes are as affordable and sustainable as they have ever been. This guide is for members only.

Afterwards Catherine Howarth from ShareAction and Luke Hildyard from the High Pay Centre (see main picture) spoke about "Responsible investing: what corporate factors influence investment returns? Is high executive pay an issue for trustees?" Many asset owners believe they are being ripped by their senior executives. Catherine argues that Pension funds should publish their fund managers voting decisions so that they can be held to account. They should also develop their own voting policy on Executive pay and make sure that fund managers follow it.

After lunch we had AMNT member Martin Taylor (bottom right) and a call to action on "What's to be done about fees and charges?". Martin would like trustees to work collaboratively together to drive down fees and charges.

David Barker from the Mercer DC and Saving team who argued that while there was still some awful bad value DC pensions schemes in the UK that the industry had improved dramatically in recent years. He also pointed out the the big Australian DC schemes treated non active members badly and that the big Dutch pension schemes that everyone raved about were currently in the process of reducing pensions of those currently retired. Which could not happen in the UK.

I then had to leave before the end of the day but I understand that the presentation by Terri-Ann Humphreys from the Pension Management Institute (PMI) went really well. The PMI set exams and standards for much of the pension world and it is everyone's benefit that the AMNT and the PMI work closely together.I also missed "Ensuring good governance of DC schemes (and DB too!)" and "How do you keep control of outsourced services" by Jamie Dobbin from PIC.