West Ham Labour in Church Street "on the knocker". 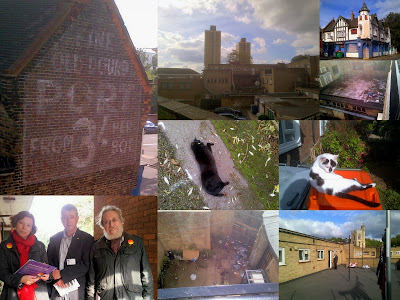 On Saturday we had a door knock surgery in Church Street, West Ham, E15.

This is probably the oldest part of the ward. West Ham Parish Church of all Saints is over 1,000 years old. King Henry VIII is reputed to have met Anne Boleyn at the church, Charles Dickens apparently used to set his watch by the time on the church clock and I wonder if founder of the trade union GMB, local Labour Councillor and MP Will Thorne use to attend this church? He was probably I think a non-conformist.

The great thing about door knocking is that you never know what you are going to come across next. Early on I met one resident who is a NHS worker and I hopefully managed to persuade her to rejoin Unison.

Another was very annoyed about a local parking problem which had taken ages to resolve. When I asked him whether he supported Labour, he looked at me in surprise and said of course he voted Labour!


A heavily pregnant Mum with Partner and 4 kids (one disabled) and another one obviously on the way, all housed in a 2 bed flat, asked for help. She knew that there was a chronic housing shortage and massive housing list in Newham. It turned out that she was having problems accessing the internet bidding system. She just needed some assistance to get on-line.

There were serious complaints of anti-social behaviour about teenagers sitting on block communal stairs smoking, drinking and frightening residents walking past. This is completely unacceptable and action is needed to try and stop this.  All tenants and leaseholders are directly responsible for the behaviour of their children and their visitors. If they fail to control the behaviour of their children then they need to be held to account for this.

It was also clear that some business premises rented out by the Council were leaving their yards and flat roof areas in a mess. This needs to be cleared up. It will be in their leases to keep these areas clean and tidy.

There were also problems with communal lighting, insecure security doors and fire risks from inappropriate use of storage areas which I will be also taking up with Council commercial premises managers.

When I got home I uploaded the returns on line onto the Labour Party Contact Creator (as well as some other contact sheets that I should have inputted earlier but had been too disorganised).  The sheer scale of overwhelming support for Labour in West Ham ward is stunning but it is also very humbling and not to be taken for granted.

There is a genuine debate in this country about whether "class politics" and "labour  identity" is important or not anymore. I can say with a degree of certainly that yes it is in West Ham ward and in Newham generally. Even in the more expensive owner occupied areas in the ward we still get excellent canvass returns. Why this is I genuinely do not really know. I would like to know - in order to spread the magic for May next year and 2015.

(there was also for no obvious reason a lot of very friendly domestic cats about on Saturday - so I have included them in picture college)
Posted by John Gray at Monday, October 14, 2013

The more expensive houses are inhabited by people who could move out, but have chosen to stay.
I never knew you liked cats!

talking to cats gives you something to do while waiting for people to answer the door.