For 39 of 40 months under David Cameron, prices have risen faster than wages. 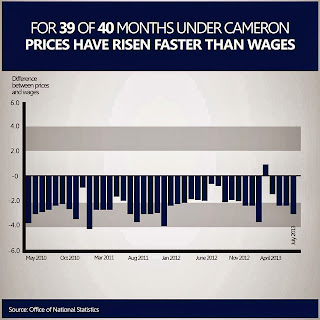 "Share the news: for 39 of 40 months under David Cameron, prices have risen faster than wages. It’s official, David Cameron is the worst Prime Minister on record for living standards and, worst of all, he seems to be in total denial about this cost of living crisis".

Yes, Mr Cameron, we are indeed "all in this together".
Posted by John Gray at Thursday, October 17, 2013