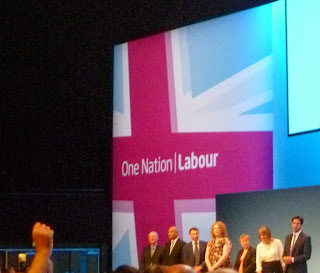 I have now had over a week to reflect (and recover) on the highs and lows from the Labour Conference 2013 (and also to enjoy the faux outrage of the Tories and some big businesses).

The high of the conference was I think the re-balance of British Labour politics however so slightly to "the left".

What Ed Miliband is proposing is a small but still significant shift away from a view that capitalism always "knows best" towards a more hard headed, pragmatic and interventionist stance.

But nothing has really happened to scare the horses. Do not forget that most Tories believe in an active role for the state. With only their most reactionary swivel eyed loons calling for the privatisation of the Royal family or the Brigade of Guards (mind you there were few of these in Manchester last week).

It is a question of balance. The evidence of the financial crisis of 2007 is surely that left to itself, capitalism will destroy itself (and us with it).

There was also some excellent fringes and debates on the conference floor. It was great to meet up with people from all over the UK and talk "politics".

While on the downside I experienced yet another MP having a strop because I didn't know he was a MP and had innocently asked what he was doing at conference? At a late night reception a certain journalist refused to speak to me because he claimed that I had misquoted him in a post. He then did a very poor Jimmy Cagney impersonation before flouting off.

I also witnessed some incredible rudeness by extremely self important individuals whose size of their ego's made me wonder how on earth they managed to walk through doorways?

Yet such incidents were very much in the minority and the vast majority of Party members, delegates and visitors behaved impeccably and were a joy to be with. My MP Lyn Brown was asked by a delegate at the London reception where she was from and she replied "Oh, I'm from West Ham CLP".

I think this conference is a game changer that has enhanced the standing of Ed Miliband.  Probably the greatest inverted compliment is that the only reason the Daily Mail launched its recent disgusting attack on his dead father is because they see Ed as a future Labour Prime Minister.