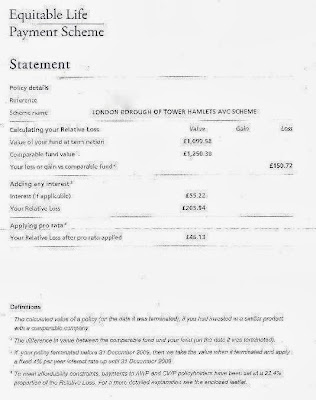 On Friday I received a cheque for £46.13 from the UK government in compensation for its failure to regulate the Equitable Life.  It was estimated that I had a "relative loss" of £205.94 (including interest) out of a holding that should have been worth £1250.30 (see scan left). It was pro rata down to £46.13.

The 200 year old mutually owned Equitable Life had promised to pay savers a rate of return which due to changing market conditions was completely unaffordable.

The basis of the claim against the Government financial regulators (and others) at the time was that they had failed to regulate it properly and if they had then it wouldn't have failed.

I had only recently started saving with Equitable life and had 50% invested in a unit trust fund which was not directly affected. However, Equitable life was seen at the time as a leading pension and investment company and many people lost a massive chunk of their life savings.

The reasons for the collapse are complex and still under dispute but rubbish governance as well as poor regulation was at the heart of it. Equitable Life was the oldest mutual insurer but behaved almost as badly and as recklessly with policy holders money as any of the big privately owned banks did before 2007.

This is a lesson to all of us who believe in mutual ownership.   30,000 policy holders died before they could receive any compensation and probably less than 10% of losses are going to be compensated.

I want to take Equitable Life to court and I need some help. I am 75 years old and Equitable Life stole my company pension of over 20 years and my life savings. I have full evidence of their intentional lies, breaking up their written promises and not answering my questions about totally loosing one company's pension and my life savings. I am sure if I go to court with my papers I will get justice. As I never been to court before can I get some legal advice how to do it? Solicitors are out of my reach as their fees are so expensive. I am positive if a solicitor read my documents he/she will agree that I have 100% proof to win. my email is joe.anthony55@outlook.com .. Thank you.

Hi Joe
Have you checked out the Equitable Life support group and see what advice they can give on this? They have been very effective so far. I assume you have been through the complaints and ombudsman system?
Unless I could get a "no win no fee" solicitor and insurance to cover costs I would be most reluctant to go to law no matter how strongly I thought the evidence.
There are various legal charities such as http://www.barprobono.org.uk/ who may be able to help you evaluate your claim.
Sorry I cannot be more helpful but Good luck