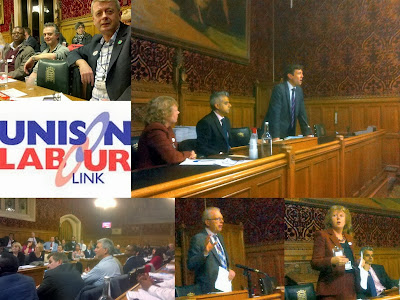 On Wednesday evening I was at the launch of the London Labour Health Network at the House of Commons. This is a new Labour campaign group to protect NHS services in London.

London CLPs, MPs, AMs, Councillors with health briefs and affiliates were invited to the launch. I was part of the UNISON delegation.

See London Labour Party report here while I tweeted on the event here.

Sadiq opened the launch stressing the key role that the NHS will play in the elections next year in London and 2015. First speaker was Labour Lord, Phil Hunt who reminded everyone that Tory David Cameron was able to neutralise the issue of the NHS in 2010 due to his promise to keep it safe. He has failed to keep this promise and we must remind voters.

Linda Perks spoke about the NHS being the 2nd most important issue in London next to the cost of living crisis. In order to convince voters we need to make sure that the Party manifesto commits to the fair funding that will be necessary.  The London Labour Party will set up a  network of campaigners on health in London.

Labour Shadow Health Minister, Andy Burnham MP, officially launched the campaign. Andy said that Labour must lead the fight to save the NHS that they made and then saved in the last government.

He told us that we have to inspire people and stop agonising on our record in the last government.  Yes, we made mistakes, such as letting in the market but we should be proud of the NHS in 2010. We need to put people before profit, we need a public health service, we need to bring into the NHS  integrated care. Labour will repeal the Tory Health & Social Care Act. Labour needs to get this  message across to voters on their doorstep.

Andy then spent around 30 minutes in a wide ranging Q&A. I asked at the end that firstly we need to defeat the Tories in elections but also that we need to make the wider political case for publicly provided services and the public sector ethos.  This will stop the drift to the "market knows best" that did take place in the Party in recent years.

Andy broadly agreed and answered by saying he is not neutral over who should be the main provider of NHS services.  He compared the unnecessary privatisation of Royal Mail and the Tories intention to do the same with our NHS. Its time to question the mantra: public bad, private good.
Posted by John Gray at Friday, October 25, 2013