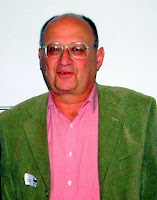 I once heard him speak at a Euston Manifesto conference during which he described the SWP (Socialist Workers Party) as not socialists because they don't believe in democracy, not workers since they are middle class and not a party but a cult.  I never spoke to him, but I have long admired his numerous clever and insightful posts on "Normblog".

He has been described since his death as "Marxist Blairite" which is pretty weird but probably on balance true.  But his intelligent, questioning nature, fundamental decency and hatred of oppression shone through. I did not agree with everything he said but there is no denying his intellect and the power of his arguments.

"I am very sad to announce that Norm died in Addenbrooke's hospital in Cambridge in the early hours of this morning. Writing this blog, and communicating with all his readers, has brought him an enormous amount of pleasure in the last ten years. I know that since writing here about his illness earlier in the year he received a lot of support from many of you, and that has meant a great deal to him, and to us, his family. The blog and all its archives will remain online.