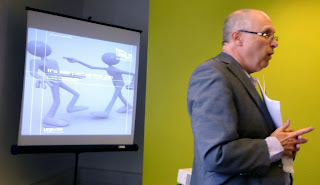 This week I made my report (below) as the UNISON Community rep on the National Health and Safety Committee.

"The UNISON Community Service Group represents 60,000 members who work for Housing Associations and in the Voluntary sector.

The sector was shocked by the shooting in July in London of a Housing Association worker and a Court bailiff who were attempting to evict a tenant. The injuries were thankfully not life threatening but according to Inside Housing magazine a man has been charged with 3 counts of attempted murder (including an income officer who was also present at the shooting).

The details of this incident are unclear pending a future court hearing but many Housing workers are concerned about a rise in violence at work due to welfare reform. In particular due to the bedroom tax, the total benefit cap and the proposed direct payment of housing benefit to tenants.

One major Housing Association has recently reported that 25% of tenants subject to the bedroom tax since April 2013 have not paid anything towards their new arrears and 24% have only paid part.

This will lead to an increase in rent arrears and evictions. While all Housing organisations should be encouraged to look at recovering debt by other means than evictions, it is likely that some Associations and Charities will feel forced to evict or face financial collapse.

This will also mean that staff will come into conflict with residents and family members who have never been in arrears before and may pose an unknown risk.

While cuts by the Government to Local Authority grants and Supporting Peoples funding has meant that staffing levels at many residential projects and floating support for vulnerable clients have been cut. Experienced staff have also been made redundant or left due to wage cuts. This can increase the risk to new staff and those remaining.

Organisations are also increasingly being forced to take on higher risk clients with more demanding needs in order to attract funding. At the same time training budgets are being cut.

London Housing Association branch held a well attended health and safety training day last week for activists on “Violence at Work”. Robert Baughan from UNISON’s Health and Safety spoke about UNISON guidance policies and the recent national questionnaire on violence. Then there was a “violence at work” workshop looking at two recent actual cases dealt with by the branch:

· A member who was threatened by a service user with a history of violence.

· A member working in a facility for vulnerable young people who was concerned about the safety of herself and her colleagues.

Followed by a talk on “Organising around health and safety/doing a workplace inspection during National Inspection day” (23rd October) and a presentation on “Assault claims and personal injury claims” by Andrew Wales from Thompsons Solicitors. He spoke about assault claims, health and safety regulations and general personal injury claims, followed by a question and answer session.

There has been a national survey by Unison on "Violence at Work" of Community staff which will be publically launched next month.

To counter these risks the organising challenge for health and safety in our sector is the same as for the wider union. The message must be the higher the UNISON density in the workplace and the greater the number of safety reps - the greater the power and influence of the union to make sure you are safe at work.
Posted by John Gray at Thursday, October 10, 2013