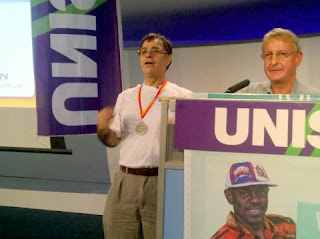 Guest post by Comrade Eitingon on the 10th London Health training event which took place on Friday October 4th at Congress House. I missed it this year due to other union commitments.

"The attendance was about 230+ UNISON activists work with in health in London, which was I believe as good as last year.

We had a had a wide range of speakers on subjects such as NHS transition; Kick it Out! - Tackling racism in Football; WARMS; ACAS - another turbulent year in industrial relations and keynote speaker our General Secretary, Dave Prentis.

The photo is of Chris Remington presenting the first 'Louis Ellis memorial award' to Rudi Spencer from the Royal Free Hospital for his recruitment efforts.

Louis Ellis is the guy in the photo on the front of the podium. Louis died over the summer, he was a character and was hugely respected within the hospital. His funeral was to cost £8000, over a three week period £6500 was raised by collections amongst the hospital staff, the branch clearing the rest.

His line manager told the region that he was so well known and popular as a Union rep that the hospital would have closed if everyone who wanted to had attended his funeral, hence there will be a separate memorial meeting.

It was good to be highlighting a real unsung union hero".
Posted by John Gray at Sunday, October 13, 2013