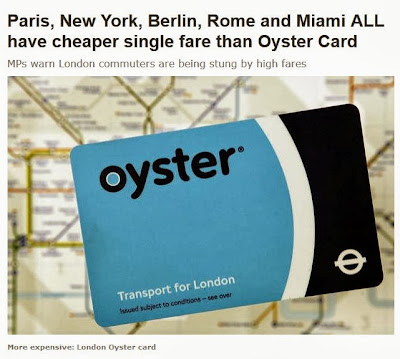 Train fares are expensive. Train drivers earn £40 to 60k. It is the price for a decent wage. Why complain?. Socialists can't have it both ways.

I suppose the obvious response is that you don't have train drivers on the DLR and I don't think their ticket prices are any cheaper?

Thinking about it if your figure of £17k is correct for DLR train captains (I think that is their name) how on earth can they live on that money?

The average market rent for a 2 bed property in Newham is £253 per week. That is £13k per year (not including Council tax etc). If they only earn £17k (before tax and national insurance) that means they would have less than £4 to live on and they can only do this job if the tax payer subsidies their employer?

They don't drive the trains, but they can if they want to.

In fact, they can run the entire system without any staff on the trains.

The DLR is a new railway. It has one staff member for every ever 2 or 3 carriages. No staff at stations. I don't think a new railway can charge the same price, as the Tube network, which was built over a century ago. They would have had to acquire new land and they now go to Woolwich Arsenal under the river (which can't have been cheap to dig a tunnel).

I thought according to your theory the fares should be as cheap as chips since wages are so low?

Most of the DLR is on existing surface tracks much cheaper to run than deep and expensive to maintain underground tunnels.