Lab12: Homes for the future - Where are our grandchildren going to live? 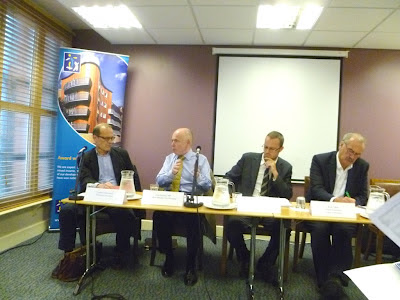 Jack spoke about the need to improve the private rented sector. 39% of its stock does not meet decent homes standard. The chief problem in the past has been the lack of political will. The next Labour Government will make housing a top priory and will have that will.

Rod reminded us that 30 years ago 6% of Government spending was on housing now it is less than 1%. State support for affordable housing is crucial. Andrew said the bi-party approach to housing in the last 25 years has failed. Supply is key and if housing is going to be given more money then what will the government spend less on?

In the Q&A I asked Rod why he thinks pension funds don't invest in residential housing (never mind social) in the UK and I also asked the panel what they thought of the £412,000 pay off to the CEO of Metropolitian Housing when it is at the same time cutting the wages of its care workers by 30%?

Rod said that the problems with pension investment is that they don't think that the return is sufficient. They can only make money if rents are high enough and secure. Affordable rents are too low for this. He also said that the £412k pay off including salary and that he understood that there had been higher pay offs in the sector. Jack replied that he was not aware of the details but could he be sent to him (I agreed).
Posted by John Gray at Sunday, September 30, 2012