Housing Voice ‘To Have or Have Not? Taking Responsibility for Tomorrow's Affordable Homes Today" 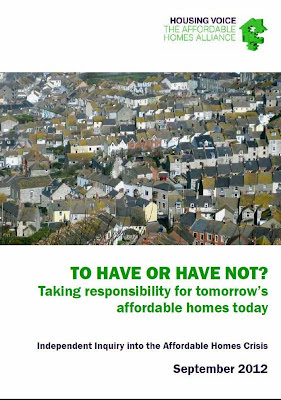 I left TUC Congress early today to return to London for this morning's launch of the Housing Voice report at the House of Commons.

Housing Voice is an independent affordable housing alliance with cross party political support. For the past year they have carried out a national inquiry, taking evidence up and down the Country.

Over 60 organisations and 3000 individuals have given evidence. Today the report was published. I was there to make a response on behalf of UNISON. This is the press release and full report.
There was around 40 people present including MPs from all the main political parties. On the main panel was Liberal Democratic Stephen Gilbert MP (who said he was the only MP to be still living at home with his parents), Conservative Mark Pawsey MP and Labour Shadow Housing Minister, Jack Dromey MP.

Not everyone agreed with everything in the report but there was more consensus than I expected.

There is lots and lots of good proposals but one of the big ideas is to use £5 billion of the recently announced £50 billion in Quantitative Easing (QE) to buy low interest housing bonds rather than government gilts. This money is then used to invest in affordable housing.
In many ways the problem and solution to the crisis in affordable housing is the bleeding obvious. There is an absolute shortage of homes in all tenures - home ownership, social housing and private rented. Nearly everyone gets this big picture, this is why nearly 50% of UNISON members have grown up children still living at home.


Supply and demand means that cost of housing in many parts of the UK is simply unaffordable.  The only market solution to reduce cost is to build more new homes. The only social solution is to build more new homes with genuinely affordable rents.
Over the next 3 years we will spend only £4.5 billion on building new social homes while we spend a staggering £93 billion on housing benefit.


Lord Larry Whitty introduced the report by saying such is the crisis 250k new homes are needed each year for the next 20 years. Last year only 110k were built.
The problem is not planning permission, nor is it a land bank (supply) problem. With huge unemployment in construction and development, capacity is not a blockage either. The problem is money.

Extra government support and QE can be used to provide that money, build affordable homes and get Britain working again. Get people off the dole and build homes, get them paying taxes and spending money in the economy.
I also picked on the recommendation that pension funds are encouraged to invest in new homes. While it is the responsibly of the state to make sure and enable their citizens to have adequate shelter. I can say as a pension trustee that schemes are crying out for suitable vehicles to invest in long term, secure, inflation linked products such as residential housing.

The problem lies with many advisers and fund managers who think its all just "too difficult" and prefer investing in warehouses and retail because that is what they are use to.  Unlike the rest of the world where pension schemes actively invest in residential property.


Appropriately the meeting stopped at 11.30 just after the Parliamentary bell rang for prayers. I'm not religious but I did have another bleeding obvious thought.
(I was pleased that afterwards Jack Dromey MP agreed to speak at a future meeting of my UNISON Housing Association branch). Check out Red Brick account of meeting here.
Posted by John Gray at Wednesday, September 12, 2012

Really good news to hear that something substantial might finally be being done, but my question would be "when"? As we've heard so much talking and, seemingly, far too little action so far.

We have a Tory led coalition government who have to do things first. I do hope that Tory MPs are being told by their die hard true blue supporters that something has to be done. Since they are fed up of living with their grown up children who cannot afford to move out.