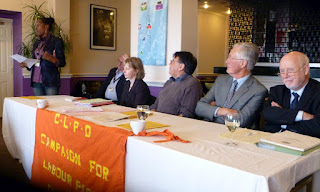 Sorry this is a little late but on Tuesday evening I went to the fringe organised by the Campaign for Labour Party Democracy (CLPD).  This is the first time that I've been to a CLPD event and had never seen its shy and retiring Secretary, Pete Willsman, in action before (see centre). I won't repeat his comments about the recent North Norwich PPC selection process.

Jim Kennedy from UCATT (and Labour Party NEC) spoke first about the need to get ordinary working class union members as elected representatives. On 4% of MPs come from a manual background and UCATT are running a campaign group "to get that plasterer into Parliament".

Kate Osamor from Haringey (speaking) explained how her borough was still recovering from last years riots and how she was brought to believe that the trade unions are the cornerstone of any civilisation. Andy Kerr from the CWU (another Labour Party NEC member) doesn't see how anyone in the Party cannot be a trade union member and that trade union members should be Labour Party members. Lucy Anderson London NPF representative described how there was a window of opportunity with "Refounding Labour" for activists to increase their influence in the Party.

Michael Meacher MP posed the question about how will we get the money to pay for work for the unemployed? Then he reminded everyone that according to the Sunday Times "Rich list" during the last 3 years the top 1,000 in this country have increased their wealth by £105 billion.

Kelvin Hopkins MP told how he first joined the TUC 43 years ago. It was unimaginable at that time how right wing things would become. He believes that the mass of people are still "to the left", they just don't realise what they want is actually "socialism". Even hard core Tory voters want the railways to be renationalised.

Simon Wellor from ASLEF complained that there was now a "political class" in this country and that people go to Oxbridge, then become Parliamentary Assistants then become MPs. Is there some sort of Labour Party by-law that every PPC selection has to include someone from Islington?

Final speaker was Diana Holland from Unite who is also the Labour Party treasurer. She wants to be optimistic & positive for the future. She senses that people want a change and is pleased that the new people who have joined the Party have stayed in membership and renewed it the following year.

I couldn't stay for the Q&A and had to dash off.  I'd didn't like to mention that I was back to work in Islington the morrow.
Posted by John Gray at Friday, September 14, 2012

I was utterly appalled that the TUC did not make a major issue of the ConDems destruction of the health & Safety of all workers at a time when 1300 are killed every single year in work related incidents & 50000 die from illnesses caused or made worse by work The action of Grayling will have signed the death warrants of many more What can be more pressing than saving workers lives & yet it Doesn't seem to even register on the Union radar & only 20 people turned up to the fringe meeting to listen to Hilda Palmer of Hazards & Families against Corporate Killers talk of the battler now on to save our lives PLEASE ensure that all union members are made aware of the horrendous extent that this government has gone to ensure that greedy negligent employers are protected by the law & allowed to kill at will.My son was just 1 of the 1300 killed in 2005 & I can assure you that the cover up that took place after the Hillsbourgh disaster still takes place following workplace killings We need a very strong union reaction to the increased risk of injury & death being foisted on union members by this government NOW people are dying every single day & we of FACK say 'Stop it, You're killing us' JOIN us

I am sorry to hear of your loss.

I think you are right that the TUC (and all of us) have not done enough to highlight and campaign against the ConDems plans to water down health & safety.

This also needs to be from the bottom and not just the top. We need to get ordinary workers to understand that they cannot rely on the Government, the law or their employers to keep them safe at work. They can only rely on their union (for all our faults) and community organisations such as Hazards and FACK.