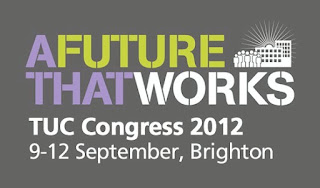 I'm in Brighton for the Trades Union Congress 2012 as an UNISON delegate. Conference starts at 4pm. Stacks of reports, motions and policy papers to wade my way through.

While on the crowded train here I tapped some strictly personal thoughts into my BlackBerry about "the state we're in".

First the bad news. Not a good start last week to hear that total trade union membership has dropped under 6 million for the first time. A long way from the 1970's 12 million.

Recession and austerity will mean that membership may (will) decline further. The public sector is shrinking and many new jobs in the private sector are so far either in non unionised sectors or self employment (real or bogus).

There are various attempts to even further restrict trade union rights such as threats to get rid of facility time and demands for minimum turnout in strike ballots.

Lets not forget that we are still by any measure the largest mass membership organisation in the UK.

The need for unions are as compelling now as they have ever been. Power at work is stacked in favour of the employer. The simple fact of the matter is that you cannot trust the government, the law or your employer (no matter how well meaning) to protect you at work, only your trade union.  Without a collective counter balance at work even the "best" employer will have nothing to stop them going amok from time to time.

Ironically it is this horrible and cruel government which could be our unlikely recruiting sergeant. There has always been is a strange belief that unions are not really needed because if the boss misbehaved you can take them to the cleaners at the courts. This has always been rubbish but the wholesale assault and ripping up by the Tory led Government on workers legal rights and protection must surely be acting as a wake up call? Are you going to be able to pay a upfront court fee of £1500 to try and get justice if you are unfairly thrown out of work?

The unions also need to start thinking out of the box about making us appear attractive to workers in small companies and the self employed. Many members of my family are in this position. They don't need representation or collective bargaining but they are worried about what will happen if they fall ill or how much money will they get when they retire. Trade unions in other countries provided income protection if sick why can't we? Why can't UK unions provide pensions? Why not offer a national Defined Benefit pension scheme modelled on the new look Local Government Pension Scheme 2014?

Finally, it seems likely that this government will last until 2015. So we have less than 3 years to use our influence in the Labour Party to help it become the next Government on the back of policies that will really benefit working people. Money alone is not enough. We need to get active within the Party and use our relatively privileged position within the Party to argue for change.

In the meanwhile let's do our bit educating our members and the public about the alternatives to this  governments rotten economic policies and get a mass turnout on October 20th as part of a wider Labour movement renaissance. Hopefully next years state of the unions will indeed have some "good news".
Posted by John Gray at Sunday, September 09, 2012