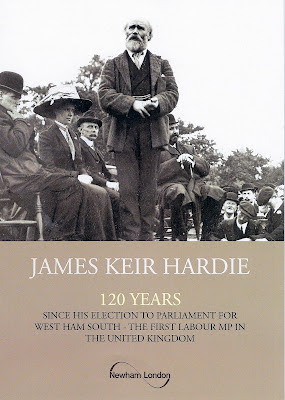 This evening Labour MP, Hilary Benn, shadow secretary of state for communities and local government, opened an exhibition at the Old Town
Hall in Stratford on the life of Keir Hardie.

This was to mark the 120th anniversary of Keir being elected for West Ham as the first ever independent Labour MP.

Hilary spoke to members of the Newham Labour Group before the Full Council meeting. He reminded us that this historic town hall was the scene of Hardie's famous victory in 1892.

He also pointed out that many of the things that Hardie had fought for in his time were delivered by Labour.

He quoted the interesting advice that Hardie gave to a younger colleague that he "should drink less, read more and think longer". 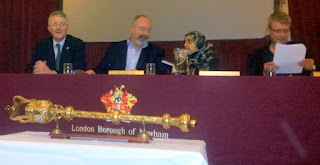 After opening the exhibition Hilary also gave a speech to Labour Group (below) about current political issues and problems followed by a Q&A.

He told a nice story about how in the aftermath of the 2008 financial crisis the Labour Government were forced to nationalise the Bank, Northern Rock.

He rang his father, Tony Benn and said "you know Dad that you were always in favour of nationalising the Banks? Well, guess what we'd done....". (Hat tip photo Ali G)
Posted by John Gray at Monday, September 24, 2012

Well done on this; really good. I can't find the exhibition listed anywhere - do you know how long it lasts?

The advice cited by young Benn reminded me of the quote attributed to that other notable campaigner Bertrand Russell ""Most people would rather die than think; in fact, they do so".

it is all very good. I will post further details when it comes out.

Not sure that the BR post is that good?