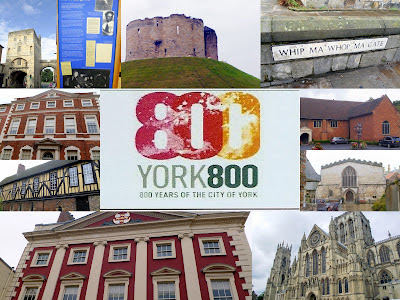 Last week I stayed in the historic City of York going for country treks during the good weather and sightseeing during the bad.

York is a theme park for history junkies. On Wednesday after getting soaked jogging around the City walls, I was trying to decide what to do next when I noticed that a free tour by the Association of
Voluntary Guides (AVG) was on offer.

It was celebrating 800 years of municipal history in York since King John first granted it a City charter in 1212.  While I waited for the tour to begin I read the display boards outside and inside the City Library (meeting point). In some ways the civic problems that York suffered from during medieval times are still about today. There was problems with bad housing, overcrowding, traffic, dirty streets and anti-social behaviour.

Okay, today York doesn't have Pestilence, War or Famine but it was strange to read medieval accounts of husbands and wives being punished for causing drunken noise nuisance and for  householders fined for putting their rubbish out in the street too early. Good to see a connection with East London in the exhibition since York in the 1930's also took in many of the Kindertransport children refugees from Nazi Germany.

Due to the on/off rain there was only 4 of us on the tour. The guide was Brilliant! pleasant,  knowledgeable and enthusiastic about his City. I've been visiting York since I was a child but I think I learnt more in that 2 hours than in any other visit. The AVG York 800 tour is Monday and Wednesday 11am and 2pm twice weekly until 26 September. The AVG also do other guided walks (check website)
I'll post the pictures from the walk on Facebook later.
Posted by John Gray at Monday, September 03, 2012