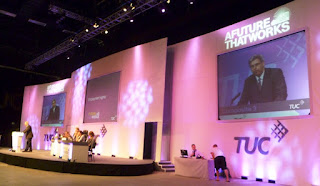 Picture of UNISON delegate Gordon McKay seconding the composite motion on "Trade Union and Employment Rights" at the start of Trade Union Congress 2012. Gordon finished his speech by offering some rather rude travel advice to Tories.

"Congress is the policy making body of the TUC, and meets each year during September. Each affiliated union can send delegates to Congress - the larger the union, the more it can send. At Congress 'motions' (resolutions for debate) are proposed and discussed. These form the basis of the TUC's work for the next year".

You can check out the TUC blogs and tweets here.  The hashtag is  #tuc12. You even watch it live online.

The UNISON delegation had a pre-meeting at 3pm where we decided whether to support or not motions up before Congress where we haven't so far made a decision. Conference started at 4pm. There was a lobby outside Congress and delegates were greeted with the traditional welcome chant "TUC get off your knees... General Strike Now".

The President of Congress, GMB General Secretary Paul Kenny, chairs the meeting. A more relaxed and tolerant chair than others I have seen over the years. He even gently told off Unite GS Len McCluskey, for speaking longer than he should have done.

Composite 4 is on "Illegal Corporate Bullying" and describes the secret "blacklisting" of trade union and safety reps by the construction industry.  Which meant that many activists were refused employment for many years if not decades. Motion 16 on "Hidden Courts" was about concern over Justice and Security Bill.

5pm Paul Kenny addressed Congress and reminded us of the role of his predecessor Will Thorne in the formation of the unions. People should be proud of unions and the social justice they have created. Paul introduced the new TUC General Secretary Frances O'Grady and gave thanks to the outgoing GS Brendan Barber.

At UNISON conferences we leave the teasing of the President until the end. Congress starts at the beginning. Paul was praised for being the "best ducker and diver in the trade union movement" by Gail Cartmail.  A point agreed with relish by Bob Crow who also thought Paul despite being a Millwall FC fan was a "decent bloke".

Battery in my laptop now running out.  Will try and post further tomorrow.
Posted by John Gray at Sunday, September 09, 2012