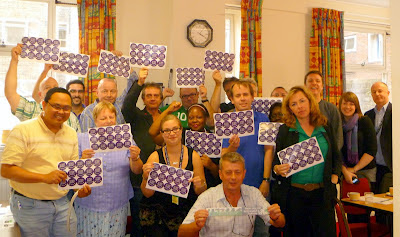 Picture is from the recent London UNISON Labour Link training event. Branch officers and activists came together from all over Greater London and all UNISON service groups.

We are here holding literature supporting the TUC anti-austerity March on Saturday 20 October.

The training event itself was excellent. It was a pilot and designed to equip Branch Labour Officers with the skills needed to further the Union within the Party. It was also how to use our access and influence to get a better deal for our members.

The first session was on "Why Politics?".  We need to be able to explain to our member's why politics matters. Politics is not about speeches in Parliament but its about their pay, its about building schools and running hospitals. Other sessions were on "tackling arguments about Labour Link"; "role of Labour Link Officer"; "Building a Branch network"; "Strategic Campaigning and lobbying MP's".

During a role play session I took on the part of a Conservative MP being lobbied by Labour Link activists...and yes, people did say I was very convincing :)

Feedback from all present was very positive and further sessions are being planned. Many thanks to National and Regional staff for putting on such a good event.