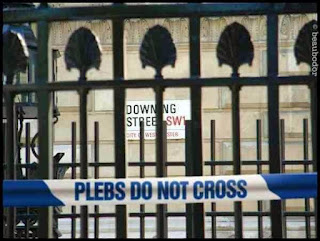 What a charmer. When they still refused, Mitchell allegedly responded:

Mitchell is also believed to have attacked the police as “morons”. Hat tip Labourlist
(Let us not forget.....see comments below made before "Thrashergate")
"Mr (Boris) Johnson said "If people swear at the police, they must expect to be arrested,"

"Not just because it's wrong to expect officers to endure profanities, but it's also because of the experience of the culprits.

"If people feel there are no comebacks, no boundaries and no retribution for the small stuff, then I'm afraid they will go on to commit worse crimes."

“Tory MP David Davies, who serves as a Special Constable, said:‘This is a threat to law and order. When I trained in London four years ago, if someone swore directly at you – I was called a “f****** pig”, for instance –you would give them one warning, then arrest them if they refused to stop.
‘It is vital that you take action in such circumstances. The police should not have to put up with this behaviour.’

Leaving aside the insults. I wonder why cyclists are treated like second class citizen.

I don't think it is fair that someone travelling by car should be allowed to have a security gate opened, whilst a cyclist who is helping the environment is forced to dismount, walk their cycle on the pavement and be further delays.....

It is about time people supported cyclist....

thank you for this contribution anon. I can safety say that your point had completely escaped me beforehand.

Mr Mitchell was speaking to PC ******** demanding exit through the main vehicle gate into Whitehall. PC ******** explained to Mr MITCHELL that the policy was for pedal cycles to use the side pedestrian exit. Mr MITCHELL refused, stating he was the chief whip and he always used the main gates.

I explained to Mr MITCHELL that the policy was to use the side pedestrian gates and that I was happy to open those for him, but that no officer present would be opening the main gates as this was the policy we were directed to follow.

Mr MITCHELL refused. Repeatedly reiterating he was the chief whip. My exact explanation to Mr MITCHELL was “I am more than happy to open the side pedestrian gate for you Sir, but it is policy that we are not to allow cycles through the main vehicle entrance”.

After several refusals Mr MITCHELL got off his bike and walked to the pedestrian gate with me after I again offered to open that for him.

There were several members of public present as is the norm opposite the pedestrian gate and as we neared it, Mr MITCHELL said: “Best you learn your f—— place…you don’t run this f—— government…You’re f—— plebs.” The members of public looked visibly shocked and I was somewhat taken aback by the language used and the view expressed by a senior government official. I can not say if this statement was aimed at me individually, or the officers present or the police service as a whole.

Mr MITCHELL was then silent and left saying “you haven’t heard the last of this” as he cycled off.

I forward this to you as all officers were extremely polite to Mr MITCHELL, but such behaviour and verbal expressions could lead to the unfortunate situation of officers being left no option but to exercise their powers.

I write this for your information as Mr Mitchell’s last comments would appear to indicate that he is unhappy with my actions.

I have recorded this fully in my pocket book".

They should have nicked him.