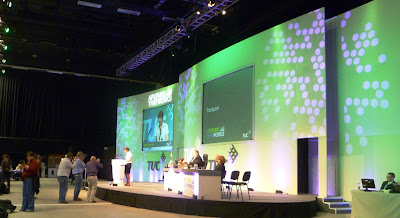 I like this picture of the new TUC General Secretary, Frances O'Grady, making a statement on behalf of the Council during the debate on transport.

There is going to be a lot of interest in Frances as the first ever female head of the TUC. Not just the media looking for a new angle. But I'm not sure that the Guardian (bless it) was really right when it said the average trade union member is now a young female graduate (surely not?  if that was the case then the majority of the 545 delegates at our democratic Congress would of course be women!).

The new General Secretary of the European Trade Union Confederation (ETUC), Bernadette Ségol, also addressed Congress today.   She looked to Frances during her speech and said  "I now look forward to working with Frances. Tom Jenkins explained to me that, in London, busses were late, but then three of them arrived at the same time. Well, like London busses, women General Secretaries have been late in making it, but you are getting them now. Enjoy".
Posted by John Gray at Monday, September 10, 2012