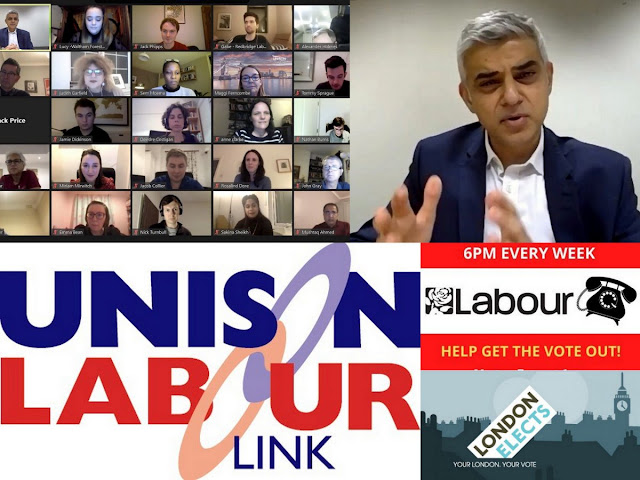 Yesterday it was good to meet up "virtually" with Sadiq and 7 London Labour Assembly candidates for a UNISON Labour Link sponsored virtual phone bank.

The briefing by Sadiq to us beforehand, just reinforced to me, exactly why we need to protect London from Tory misrule and re-elect him as our Labour Mayor (and also elect all our London Assembly Labour Candidates).

Being London Mayor is the toughest job in UK local government and while we might not agree with him over everything, we need him to be re-elected as our Mayor and for there to be a majority of Labour Assembly members to make progressive politics happen.

Newham is crucial in this election. Since the vote is by proportional representation, every single vote cast will really count.

Only phone bank campaigning is currently allowed due to Covid. As Chair of UNISON Labour Link in Greater London, I need to work with our officers on how we can get more of our UNISON 130,000 members involved in this crucial "dog and bone" campaign..