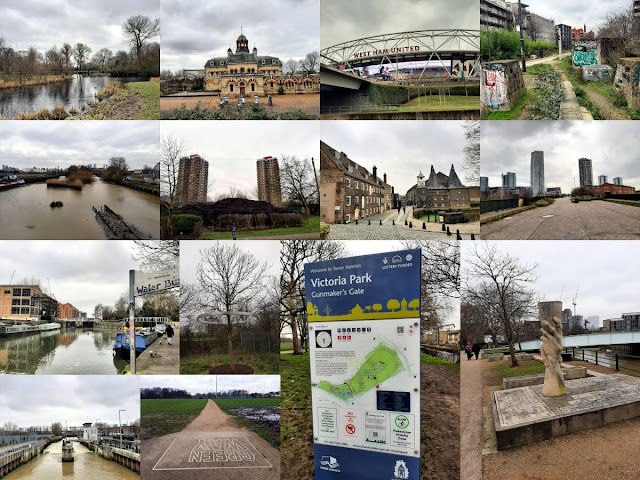 Following last weekends enjoyable walk to Valentines Park in Ilford, Gill and I decided to go in another direction to Victoria Park in Tower Hamlets.

We started off at the Memorial Recreation Park, E15 (the original home of West Ham FC?) then joined the Greenway and turned left towards Olympic Park (on top of a cross London Victorian Sewer outlet) which Mahatma Gandhi used to walk along to enjoy the views.

We went past the imposing Victorian Abbey Mills Pumping station to cross over Stratford High Street. I used to walk or cycle along this route from my home to my housing office near the Roman Road in Bow pre 2012. Much has changed since. In fact incredible change.

We stopped off at the Viewtube to check out what what was going on (outdoor music, takeaway cafe,  fresh bread & cakes stall).

West Ham FC played Liverpool FC at the London Olympic Stadium today (no crowds allowed due to Covid). We walked past and could see activity and hear stadium announcements. Liverpool won 3:1.

Then we walked to Victoria Park past British Second World War anti tank  invasion defences (and the scene of the first ever UK Railway murder).

After lunch on a outdoor picnic table overlooking East Lake, we made our way back via the Hereford Union Canal then turned right to follow the River Lea to the historic Three Mills Island.

We paid our respects to the workers memorial statute at Three Mills Green then re-joined the Greenway via the river weir (and past the site of the first "Big Brother" TV location) and then back to Memorial Park.

A lovely walk which lasted 8.25 miles and took 3 hours and 16 minutes (could be shortened by leaving out stretch to Victoria Park).  Recommended.