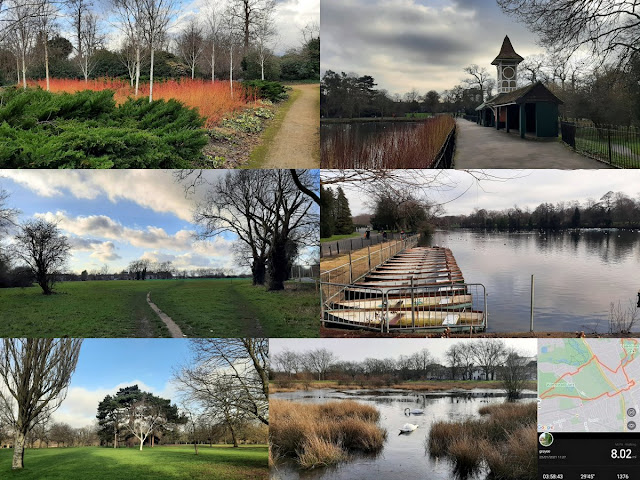 Off message but this morning I was deciding on where Gill and I would go for our weekend Covid exercise/walk and I did consider walking up via Epping Forest trail to Walthamstow and then back via the River Lea  and Stratford. It was too long a walk for this time of year, so we decided instead to walk to Valentines Park in Ilford.

We walked across Wanstead flats then through Alderbrook, past the allotments and stables, along Cycle route 6, across the pedestrian bridge over the A406 into Cranbrook and then followed signs to Valentines Park.

The Park is huge and lovely. I think I have only been once before in the park (for a ice cream?) and was amazed how large it is and how many lakes and canals. We had a takeaway cream tea in the park café then after a tour of the park walked home after stopping off at Marks and Spencer for provisions. We walked along Romford Road for 10 minutes then turned right along the Roding Way path. Turned left at the City of London cemetery along the railway track into Manor Park, then back to starting point along Wanstead Flats. A great walk which was 8.02 miles and took us just under 4 hours (including stops and shopping)

When I got home I realised courtesy of the excellent local history museum for Walthamstow @VestryHouse that today was the 112th anniversary of the so called "Tottenham Outrage". When 2 armed robbers were chased for 6 miles from Tottenham to Walthamstow by largely unarmed police officers and civilians. The robbers fired some 400 rounds and killed one police officer and a ten year old child (no doubt unintentionally) as well as wounding many others. They were chased on foot, on trams and even by pony and cart. By coincidence the route they took was somewhat similar to what I was originally planning to walk today.

The robbers were political revolutionaries in exile (which resulted in a lot of racist and anti-immigrant commentary at the time) from Russia and both committed suicide when cornered and about to be captured. An amazing story and also one I had no idea it had happened a few miles away from where I live. In the summer I will definitely do this walk and follow their escape/pursuit route.

Many years ago Essex played some of their first class matches at Valentines Park. A real treat.