What does "Just Transition" mean in practice? We cannot deliver on climate change unless we have justice and fairness...? 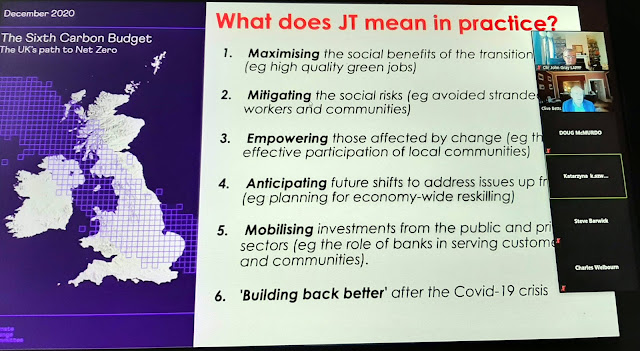 Last Wednesday I attended the launch and first evidence session of the All Party Parliamentary Group for Local Government Pension Funds and its inquiry into ‘Responsible Investment for a Just Transition’. The meeting was chaired by Clive Betts MP.

"As you know, climate change is a threat to lives and livelihoods, and presents systemic risks to the economy and financial markets and to our future prosperity. Shifting to a net zero economy has the potential to create new jobs and drive economic growth. However, the benefits may not be felt evenly with some employees and communities bearing the brunt of industrial change. This not only risks creating economic hardship for some but also undermining support for the shift to net zero (my empathises).

Ahead of the UN climate change conference in Glasgow in 2021, the APPG inquiry will take evidence - and then compile a final report - setting out recommendations to UN agencies, national, devolved and local government, policymakers, business and investors, about how the risks that climate change poses can be avoided in a just way. Over the first half of 2021 the APPG will hear a wide range of perspectives on the issue and, in particular, answers to the following questions:

· What is a just transition is and why does it matter?

· What initiatives would help ensure a just transition

· What action you would like to see investors and government take on this agenda?

The APPG for LAPF believes that it has the opportunity to shape the national agenda on the just transition to a net zero future, and wishes to hear from as many voices as possible".

In response to a question what Local Government Pension funds can practically do to support "Just Transition" I suggested that they should support actively engage with companies they own to ensure that they follow the International Labour Organisation (UN) principles on Trade Union recognition and collective bargaining. No justice No Transition.