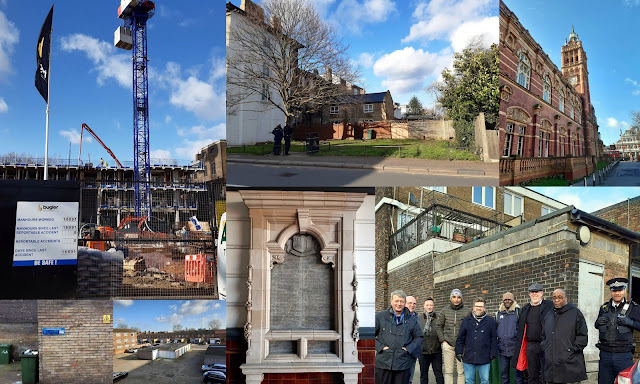 Last week I went on two walkabouts with my Cllr colleague, Shaban Mohammed. First was to Drakes Walk, East Ham where we met up with the local Newham Council Housing liaison officer and a resident concerned about people gaining entry into her housing block to commit ASB as well as her personal outstanding repair issues.  Repair orders have been sent out but I am meeting technical officers next week to see what we can do to make our door entry systems to our housing blocks more secure.

Walking back to East Ham town hall it was good to see the building going ahead on the site of the old Didsbury Centre (top left of collage). Newham Council is building 148 new homes at this site. We are now building new homes across Newham (at least 50% of which will be truly affordable homes set at the London Affordable rent).

Also, on the way back I noticed for the first time that inside the Newham 6th form collegiate centre there is a large plaque dated 1903 marking the founding of building with the names of my Councillor predecessors.

Later that day I went on another walkabout in my own ward in West Ham to decide on the future of a green space which has been used by street drinkers for many years, causing a serious nuisance to residents living nearby. We had present a local concerned resident, Police, Newham Council Community Neighbourhood and Safety officers as well as political leads, Cllr James Beckles and Cllr James Asser.

This green space is right next to West Ham park and 3 options were discussed i) turning it into a community garden but fenced off; 2) building new homes on the site (if possible) or 3) greater enforcement on those individuals causing a nuisance. There was also across the road disused and abandoned garages that need sorting out.

I have emailed regeneration officers details of the site to see if they are interested and we will be holding another walkabout or public meeting in 4 weeks time.

Unless anyone has got any other good ideas for the site?
Posted by John Gray at Sunday, February 16, 2020