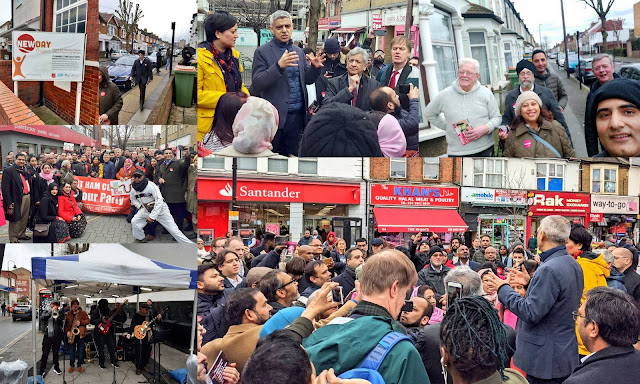 It turned into quite an exciting political event since Rokhsana and Sadiq both stood up on a bench and gave short speeches to activists and Saturday shoppers who stopped to listen. These sorts of interaction on the streets is too rare nowadays.

I went off to door knock with comrades from East and West Ham. I only came against 2 "Against"  contacts during the entire canvass session and many Labour supporters.

During the canvass we knocked on the door of former Newham Councillor, David Macidary (top right of collage - who I did not know). David was also a local teacher who had also taught geography to one of our canvass team, Cllr Harvinder Singh Virdee, when he was a boy. Small world.

Looked like a huge crowd to see him. I counted at least forty people.. meanwhile Rory Stewart (Independent) was staying overnight at a Newham residence to get some grass roots understanding of life at the sharp end. Have to admire him.

No, there was at least a 100 when Roks and Sadiq started talking to crown including many passerby's who stopped to listen. It was good to watch old fashioned political street politics.

Rory is an interesting bloke and good that he stayed over in Newham for one night. I think though Sadiq is more likely to have an real life understanding of life in Newham as a Black British born and brought up on a London Council estate.

I feel angry when I see photo of this trio (Sadiq Khan, Stephen Timms and Unmesh Desai). They have activility supported expansion at London City Airport.

This trio did harm to communities in Newham and neighbouring Boroughs because of aircraft noise from London City Airport.


They all worked hard to make the airport owners rich. Working for the "few" rather then the "many".

Aircraft noise is driving me up the wall.

Even though I own my own home, but moving elsewhere is not cheap. House prices are nuts. Taking out an additional mortgage is painful. Not everyone has a job security for life, to take on huge mortgage. It is n't fair to tap into life savings, which are mean for retirement.

The Greens proposed buying up London City Airport and turning them into homes and business. You want to build more homes. Where is the land to build new homes??? The runway is just under mile long. Do we need a business that is wasteful on land use?

I have never agreed totally with any Leader. I think that Sadiq in the past called it wrong over City airport but on nearly every other issue he has called it right.

I suspect that the climate emergency will mean that internal and Euro flights will eventually be ended either by regulation or taxes.

You may be right that it will eventually be a housing estate. I guess the owners have priced in this possibility.

Don't ask Labour to do anything on climate. It's only a few years ago that they wanted all the coal mines to be kept open…??? Hahaha