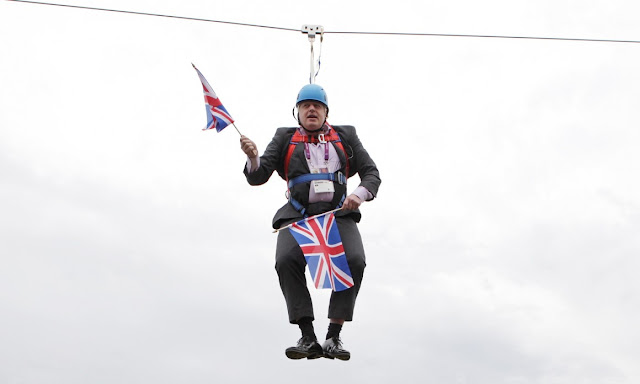 (Hat tip Newsbiscuit.... It is on the internet so must be true)

"A Government spokesman today confirmed that a multi-departmental committee is examining plans for the construction of a zipwire linking Scotland to Northern Ireland.

‘A second option is to connect Portpatrick (pop. 960) in Scotland with Ballystrudder (pop. 992) in Northern Ireland. The potential for increased revenue from this scheme with such a rich and diverse hinterland and a burgeoning population may prove decisive.’

Several correspondents from engineering and architectural design journals posed questions of the spokesman about the construction of the zipwire system.

‘Well, working on the accepted principle of a minimum gradient of approximately 1m drop per 100m travelled, we consider that the Kintyre-Torr Head line will necessitate the construction of a tower over 200m high. Given that this would land the traveller directly at sea-level at the other end, we may wish to extend the construction somewhat higher, and provide a higher landing spot.’

‘The longer Portpatrick-Ballystrudder line will in all probability require a launch tower some 375-400m high. We are also looking at longer-term development of a higher-speed higher-capacity SuperSNIZ or SS2 where the gradient will be much steeper and the corresponding journey time will be cut dramatically. Even higher launch towers and softer landing zones will be investigated by this committee.’

The spokesman did add one proviso: “Of course, we recognise that initially all the traffic will be one way, but that is really not this Government’s fault. Gravity is an issue that was not dealt with adequately by previous Governments. Indeed, several EU Directives mandated the nature of gravity.’

‘But now that we are free from these we intend to invest strongly in a marvellous new British gravity designed here by our magnificent boffins. Freedom from the restrictive red-tape will have us producing gravity to travel over, under and sideways as well as down.’
Posted by John Gray at Thursday, February 13, 2020

Boris may not be Prime Minister material, but he is the kind of man who has big ideas. We would still be throwing our sewage into the river Thamnes, unless people had the big ideas to build a sewage plant. The London Underground would not have existed, unless people had big bold ideas.

In Newham we got the Cable Car and that was down to Boris. Newham residents did n't need to pay for it unlike the London Stadium (cost £40+ million), Building 1000 (Newham Dockside) £110million, London Pleasure Gardens £7million....

Well I would agree that Boris is not Prime Minister material (conspiring to beat up journalists with criminals, spending tax payers money on his girl friends businesses etc) he did waste £43 million of the garden bridge https://en.wikipedia.org/wiki/Garden_Bridge and whatever on Boris Island airport nonsense.

...very virtuous of you John.

At least Boris has more than one shirt..

We have something in common at last!