Why I am voting for Keir Starmer: Radical & Relevant 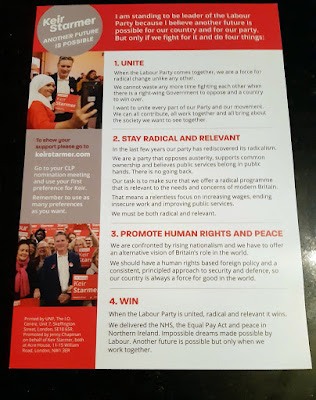 Yesterday Keir Starmer narrowly lost out being nominated by West Ham Labour Party by 5 votes.  There were 110 members present compared to nearly 2000 members in West Ham.

This is roughly (from memory) what I said but also what I meant to say at that nomination meeting.

"I am supporting Keir Starmer to be the future leader of our Party since he is the one best placed to unite the Party to win a future election. He is radical and relevant.

We need to unite the Party with someone who can appeal to the left and right in our progressive Party since the electorate will not elect us if we are divided. The elephant in the room today is that we are divided and there are too many groups and factions that hate each other more than they hate the Tories.

We desperately need a Labour Government in power. Especially in Newham. In Newham after 4 election defeats we have 27,000 families on our waiting list, we have 5300 families in temporary accommodation, we have 50% more children living in temporary accommodation in our borough than in the entire North of England. In Newham after taking into account housing costs, 50% of our families are defined as living in poverty.

Surely everyone here understands that the Tories will not solve this. We need a Labour Government in power ASAP.

To be clear our "yes but no but" Brexit policy was an important factor in our disastrous campaign but this is a collective policy that was owned by the entire Shadow cabinet. It is also a fact that we lost nearly twice as many Labour Remain supporters (1.9 million) compared to Brexit supporters in 2019. With hindsight a clear pro remain and second referendum policy might have worked.

I will also admit to coming from a similar working class background as Keir. I am the same age and like Keir, my mother was a nurse and my father a skilled tradesman working on the assembly line in a factory.

Also, despite living in Newham for over 30 years you may tell from my accent that I was born and brought up in what was the Labour heartland of industrial North East Wales.  An area that used to dominated by coal mines, steelworks, textile mills and potteries. The Party was decimated in 2019 and my old constituency (now called Alyn & Deeside) is the only Labour seat left and only by a few hundred votes.

Brexit may have motivated leave and remain voters to desert Labour but it was decades of rotten jobs, poor housing and rotten wages that was the real cause. We need a radical economic leader who can unite the Party and win back those so-called "borrowed" votes.

In my view Keir is the best placed leader to do this to be radical and relevant and win a future general election.
Posted by John Gray at Sunday, February 09, 2020

Spent most of the speech talking about yourself John (as per normal), hence you didn't secure my vote..I couldn't give a stuff about North Wales and working down the mine. Its ancient history and far removed from West Ham.

Well, I have always had sympathy with "The personal is political" school of thought but it shows you don't know West Ham that well. The similarities over the de-industrialisation of West Ham and North East Wales is striking. John Summers Shotton steel and Thames Iron works both dominated our history.

Both post industrial areas are different but have very similar (not the same) issues over poverty wages, poor housing and insecure employment.