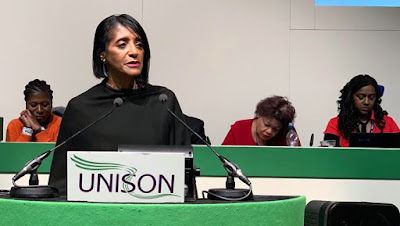 There is currently a mass of Labour Party elections and nominations. My UNISON NEC colleague (and friend) Carol Sewell is standing for the NEC BAME vacancy.

I know her as a softly spoken but strong willed trade union organiser and leader who is passionate about equality. A former respected Vice President of UNISON.


"Labour’s BAME members need a strong voice at the top of our Party, a voice that can be trusted, a voice of experience.

As the national chair of UNISON’s Black Members Committee I can bring my experience as a senior trade unionist fighting for the rights of BAME members in the labour movement.

I know my union is stronger because of its diversity and I am determined to fight for the same in the Labour Party.

Vote Carol Sewell for an experienced voice on Labour’s NEC
With decades of experience working providing Housing and Benefit services in Birmingham and Walsall, I know what savage cuts look like. I have seen the harm that has been done to Local Government and the vulnerable people in our communities that rely on its services.

I will bring my real life experience to Labour’s ruling National Executive and ensure that those who are often ignored are part of our Party and are properly represented.

Vote Carol Sewell for change in the Labour Party
Labour cannot take the votes of BAME communities for granted and I will be a champion for diversity and make Labour reflect all parts of our communities.
Labour cannot win if it does not change.

I want to see all BAME shortlists for introduced.
I want to see Labour tackling racism, wherever it occurs, both inside the Party and in our communities.

I want to see Labour Introduce policies at local and national levels that tackle inequality and challenge the status quo.

Vote Carol Sewell for unity in the Labour Party
Now, more than ever, the Labour Party needs to come together, to take on the Tories and make sure Brexit doesn’t become a race to the bottom.

If Brexit becomes an economic nightmare it will be BAME communities that suffer the most.

I am determined to use my experience of bringing people together to make sure Labour’s MPs, councillors, activists and members work to put Labour back in power and win the trust of the British people.
Carol Sewell, Membership number: L0121663
Posted by John Gray at Friday, February 07, 2020