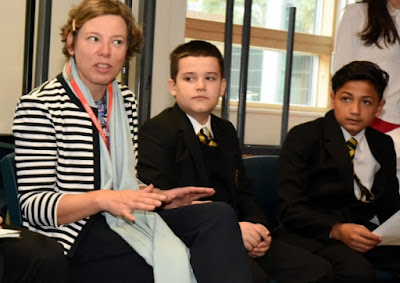 Hat tip Newham Recorder (NB Children in pic are not SEND)  "The council chief responsible for education has slammed the government over how it funds education for the "most vulnerable".


Newham Council is proposing to change how it allocates money to mainstream schools to support pupils with special educational needs and disabilities (SEND) as it anticipates an overspend of more than £8million.

Cllr Julianne Marriott, cabinet member for education, said: "What our young people really need is for government to properly fund their needs and to act on the recommendations of the education select committee which found that local authorities have been 'set up to fail' by government."

A Department for Education (DfE) spokeswoman said: "No child should be held back from reaching their potential. Our SEND review will look at how we can improve the support children and young people with SEND currently receive so the system works for everyone, in every part of the country."

Cllr Marriott made the comment while launching a consultation on how the council can "better allocate" the government money it gets for the borough's "most vulnerable" youngsters.

The government provides funding for pupils in Newham with the highest special educational needs and disabilities.

The council expects to overspend on its high needs block - the pot of money that funds pupils with SEND - by £8.2m by the end of this financial year. This means that the Department of Education will order Newham to provide a budget recovery plan.

The National Audit Office reports that eight out of 10 local authorities overspent their schools high needs budgets in the year 2017-18.

The council has provided an extra £1.3m this financial year and for the following two years but the funding is still dependent on a grant provided by the Department for Education.

The town hall says changes are needed to ensure a better match between the individual needs of SEND children and the funding schools get, and to reduce the amount of overspend.

The DfE spokeswoman said: "We are increasing high needs funding for local authorities by £780 million next year, boosting the total budget for supporting those with the most complex needs to more than £7 billion in 2020-21."

The proposal only relates to pupils with high level SEND going to mainstream schools in the borough and does not affect pupils in special schools, resource provisions in mainstream schools and pupils attending schools outside Newham.

People can share their views until Tuesday, March 3. For further information visit newham.gov.uk/SHN
Posted by John Gray at Tuesday, February 18, 2020

And with a top degree from the University of Essex in Political science, and apparently no experience of teaching, she should know...!
Spare us all from gifted amateurs.

You don’t have to have a degree or be a teacher to work out that the government is not giving Councils enough money to fund the needs of SEND children.

Agreed... but if you want to pose as the head Newham's education chief it would be helpful to some relevant experience? You wouldn't expect to take financial advice from someone who had no relevant experience, or find the head of a hospital had once been a member of St.John's Ambulance.. it's fairly obvious. This is the problem of the Labour Party...gifted, self righteous amateurs. That's why Labour always screw up the economy, because they have no understanding of how to generate cash for public services from the economy, but hey-ho, "Right On comrade"!

Now you are just being silly again. It is commonplace in democracies to appoint non specialist politicians to positions. Very few Chancellors are economists, very few defence secretaries are former soldiers nor Health leads doctors or nurses etc.

Like with the Civil service, Councils employ professionals officers to run the service and advise on policy and strategic options.

I suspect your response speaks volumes about your qualifications for the job John...

The problem you have John is that you are unable to distinguish between politicians... like the Tory cabinet... and people in roles such as yourself whom are paid to "run/manage the council" and its services. To manage and run the council services much like most other jobs you need experience. To run the schools in Newham you should have experience?

More silliness and ignorance. As it happens I have a housing background but I do not "run/manage" our housing service.

The new minister of housing has some experience of housing issues but has mostly worked in IT https://www.insidehousing.co.uk/insight/insight/who-is-new-housing-minister-christopher-pincher-65080