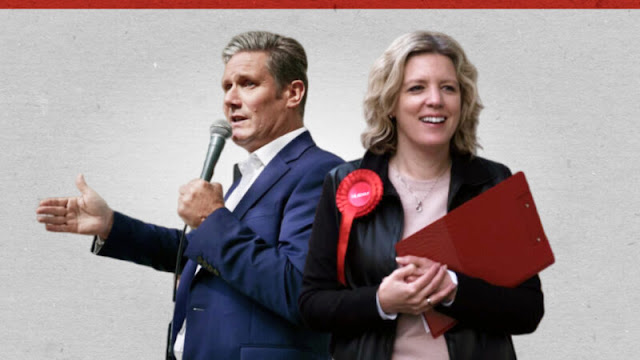 This is a really positive endorsement from the Momentum's national coordinator until 2019, and who had previously worked as private secretary to Jeremy Corbyn. This shows the breath of support for Keir and he is the one who is best placed to unite all wings of the Party and win a future General Election. We must ignore the haters and unite.

"The Labour Party can and must win the next election. For that to happen, we need to recognise the inherent paradox of our first-past-the-post system. In theory not producing coalitions, in practice it just anticipates them. In many other countries, Labour would be two, three, four separate parties, coming together to form electoral coalitions. We form our coalition in advance.

Do we want now to become a unified, strong internal coalition that can go out with confidence to the country and create the other alliances necessary to win? Or do we think that the political differences between so many of us are so great as to be unsustainable?

If it is the latter, we will consign our party to permanent internal strife and could break under the pressure, destroying the chances of a progressive government in the next decade. We cannot let that happen. Our task is to elect a leader with whom we can build upon our 580,000 membership. We must become a force of one million plus – in order to then reach out far beyond the party and into communities where Labour currently has little presence. There is no other path to power.

Our purpose once in power is to empower others and transform the country. There has been a shift in the political centre of gravity of our party: Labour is no longer intensely relaxed about the filthy rich. The fight against inequality and for economic, social and climate justice are not our nice-to-have but our must-have reasons for being in the Labour Party.

All of the leadership candidates have recognised that it was the ‘how and when’ as much as the ‘what’ of our manifesto that did not persuade the public. When Labour’s individual policies – on taxation, the minimum wage, public ownership, free personal care, the green new deal – are polled, they have significant support from the public. Our challenge is to build a cohesive party that finds compelling ways of engaging with people across the country.

I am backing Keir Starmer because he has placed unifying the party at the heart of his mission and made an unequivocal commitment to preserving our core policies. In defending the transformative economic agenda upon which he stood as a shadow cabinet member in 2019, I trust that Keir means what he has written in his ten pledges to us. It would be self-defeating for him to say one thing then act otherwise. One of the lessons we all – leadership candidates, MPs and members – have just learnt the hardest way is that a perceived lack of authenticity is fatal. I am confident that under his leadership, we can build an enduring coalition.

Keir has made clear that he understands the imperative for a fundamental redistribution of power as well as wealth. This must include restoring dignity to local government and addressing the inequities of our voting system, to both of which he has committed. It further means, as Keir has set out, a commitment to creating a federal UK. That is not simply to give Labour a hope of winning in Scotland. It is critical to help stem the tide of nationalism whose north-of-the-border manifestation may not alarm many but whose English version is underpinned by xenophobia and racism, which Labour must resist at every turn.

These same forces of xenophobia and racism now propel the deportation from the UK of people for whom this country has been their only home. Labour needs a leadership that will put the defence of human rights not only at the heart of its foreign policy but at the core of its opposition to the rights-trashing government of Boris Johnson. From consistently championing the rights of EU citizens to defending people facing the death penalty and activists taking on a planet-destroying multinational, Keir will bring a lifetime of experience defending human rights to the despatch box.

With a drive to unify our party around a radical programme, the experience to oversee the rebuilding and management of our complex party machine and the skills and determination to take on the Tories, Keir Starmer can become a great party leader. If we – over half a million members – accept and rise to the challenge of supporting him in this endeavour, then we will become more than the sum of our individual parts and also a great party".

Laura Parker should be ashamed at calling any group "filthy"... many people who are well off have worked hard all their lives, paid a huge amount in tax, and generate the funds that pay for so much public spending. The Nazis called people filthy, and its contemptible to use this sort of language about any group that you disagree with. Its this sort of casual demonization of other people that is so dangerous in politics and the Left is highly blameworthy for this type of descent into the gutter. I thought Corbyn wanted a gentler sort of politics... what a joke.

It would seem you don't know or understand the history around the term "filthy rich". Which does not surprise me in the slightest.