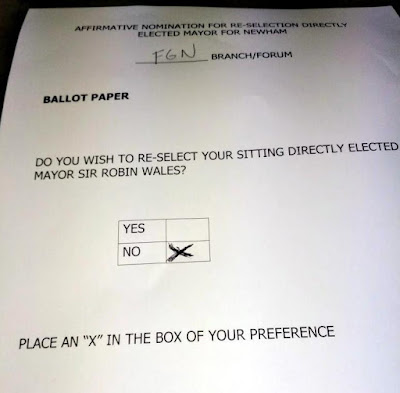 I took part as a local member in the Newham Mayor trigger ballot meeting for my ward, Forest Gate North.

All members present had the chance to make a contribution before they had a vote on whether to affirm Robin Wales as the Labour candidate for Newham in May 2018 or have an open selection with other candidates putting themselves forward and being given the chance to be selected.

I made the point to the meeting that it was more than daft that Robin had been in power in Newham since 1994 and that it was about time that he had to stand on his record and also allow alternative candidates to make their case.

It is called democracy.

While we were at the meeting we heard that Stratford Ward voted 26-1 in favour of any open selection and in the former Robin Wales stronghold of Forest Gate South it was 30-1.

A 100% increase for him compared to all other votes :)