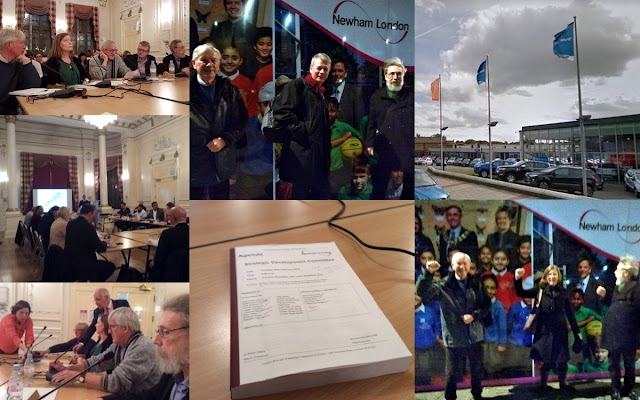 I was really proud tonight of West Ham Ward residents who objected, organised and worked hard to oppose a planning application that would have robbed local people and the homeless of chance of homes at an "affordable" or social rent.

We managed to persuade the Newham Strategic planning Committee to unanimously defer the application due to failures in consultation and uncertainty around the provision of social housing. Many thanks for taking this decision and to the members of  West Hammers Team 4 Social Housing - Tina, Ian, John, Joe & Seyi (sorry if I have missed anyone out).

Tina was very good at the meeting, quoting that the Newham Mayor, Robin Wales, had very  recently told Clive Betts MP and his House of Commons Select Committee that at least 35-50% homes are always affordable in Newham development. So she asked why in this scheme are we only be offered 25%?

We all had 2 minutes to speak.


I said "My name is John Gray and I have been a Cllr since 2010 for West Ham ward where this site is located, speaking in support of residents objections against this application. I would like to start by saying ward Cllrs and Residents want to work with the developers to resolve our differences but the percentage of social housing offered is utterly and absolutely unacceptable

I also speak as someone who has spent most of his professional career working in housing in east London, I am genuinely amazed that this application is only proposing that 25% of these homes to be so called “affordable”.

This is a prime site, right next to a tube station with excellent other transport, retail & leisure facilities. There is limited decontamination works to be done to prepare the site.

Therefore, if Cllrs were minded to pass this application, I would like them to suspend the process and order that the financial viability plan put forward by the developers, claiming that they can only only afford 25% is published and put out to public scrutiny like other local authorities do.

Let me be clear, I have never met nor no knowledge of these particular property developers however it is in the public arena that other developers have padded out their plans with costs that they have no intention of spending.

For example, claiming they will use expensive building materials, when in practise they use much cheaper materials, in the knowledge that the local authority will not have the ability or resource to check.

So please, pause this application and let elected representatives and residents make sure that no one is cooking the books".

(see pictures of some members of West Hammers outside the dreadful hoarding outside the Stratford Town Hall which I have already complained about further to the Newham Chief Executive Officer)
Posted by John Gray at Tuesday, February 20, 2018