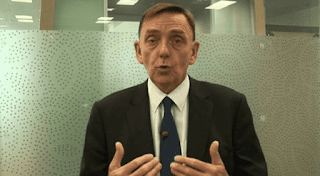 Blimey, is this supposed to be an Alan "Olive Branch" to the community?

Since nearly all the young, talented (and mostly female) Newham Councillors are now standing down - I think this is just a little late...

But rather bizarre and strange quotations methinks?

Hat tip article in "On London" by Journalist Dave Hill

"Newham Mayor Sir Robin Wales has urged local Labour Party critics to judge him on his record and told his critics to show that they have better policy ideas as he prepares for a selection battle that could end his 23-year leadership of the East London borough in May.


In an in-depth and often combative interview with On London, his first since the “open selection” contest was announced, Sir Robin pledged that, if he wins, his next mayoral term will be his last “no matter what” and that he would bring new councillors into his mayoral team to “give them a chance to show what they can do” as he prepared the ground for his successor.
He characterised Newham’s as “the most radical council in the country”, citing current policies on employment, housing, homelessness, education and supporting poorer residents as models that could be followed by Labour leader Jeremy Corbyn, and saying that improving health care and skills would be his priorities in any fifth mayoral term.
Sir Robin also strongly defended the conduct of the 2016 “trigger ballot”, which initially saw him re-selected as Labour’s 2018 mayoral candidate by 20 votes to 17 but was later annulled following complaints and legal action by local members, claiming that the main problem was simply poor record-keeping by party volunteers and that he was the true victim of procedural irregularities.
He claimed that the outcome of the Newham Co-operative Party trigger vote in 2016, which went against him by a single vote, was “fixed” by what he said was his wrongful exclusion from casting a vote himself and by a fellow Co-op member being permitted to cast one against him despite leaving the relevant meeting before the ballot itself was held.
He also said he has evidence of invalid votes having been cast at ward branch meetings during the original trigger ballot process and that there had been, in breach of party rules, a concerted prior effort to sign up members in order to influence the outcome, leading to “about 200 votes across a number of wards” being cast against him. There were 20 individual branch ballots, resulting in nine trigger ballot “yes” votes to Sir Robin going forward automatically as mayoral candidate for 2018 and eleven “no” votes.
Sir Robin said he has written to individuals he believes were involved, informing them that “we might take you to court”. Referring to “a particular group in a community” he likened the situation to that in a neighbouring East London borough, Tower Hamlets, where Labour has a history of contending with allegations about the signing up of substantial numbers of people from among its Bangladeshi residents, who are thereby enfranchised to vote in candidate selection contest ballots but who make no other contribution to the party.
Though declining to identify the “particular group” by its ethnicity or religion, Sir Robin said the members concerned were “all men”, reiterated his long-standing disquiet over that he terms “community politics” and was keen to place on record his view that in Newham Labour “there are loads of Muslims who are progressives”.
Describing his approach as Mayor as guided by “considered risk”, he talked up the potential of the Newham-owned Red Door Ventures housing company to build new homes for market and affordable rent on the large scale required and stressed the need for such initiatives by London councils, given that commercial developers have consistently failed to meet housing demand in London and that government policy restricting borrowing for house building was “moronic”.
Responding to criticism that Newham’s £40m investment in the conversion of the 2012 Olympic stadium, now the London Stadium, has failed to produce a return, he urged people to look at the bigger picture of the Olympic Park and its environs, saying that Newham’s commitment had been to a wider regeneration programme and that this would eventually produce “somewhere between £120m and £160m in value” to the borough".
Read the full On London interview with Sir Robin Wales here.
THANK YOU for visiting this website. OnLondon.co.uk has led the way in covering the Newham trigger ballot story. It needs your donations to keep it going, growing and continuing to provide fair and detailed journalism about a range of big issues facing the capital. Please support this Crowdfunder today.
Posted by John Gray at Monday, February 19, 2018