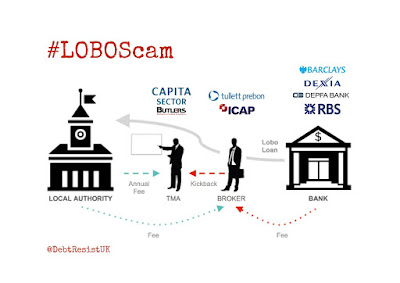 On BBC Radio 4 "World Tonight" on Wednesday there was a feature on the LOBO derivative loans scandal  and how they have played a role in the recent bankruptcy of Northamptonshire County Council.

Northamptonshire had £150 million exposure in these toxic loans. Local Councillors were quoted as saying that they have to pay twice as much as they should - an extra £3 million per year. Paying up to 11.35 % interest per year, which is 22 times the current base rate.

Joel Benjamin from the campaigning group, Debt Resistance pointed out that these are 50-60 year loans and not only do you face financial mark risks from such derivatives but that you face crippling exist penalties of up to 90% of the face value if you try to get out of them.

The biggest LOBO derivative loans borrower in the Country is Newham with exposure at one stage of £532 million (now apparently reduced).

I was interviewed as one of the many Councillors in Newham, who are convinced that we have been totally ripped off by the Banks.

"We are paying far more than we should.  If we had taken out different loans from the government we would be paying about 1 or 2% per year but instead we are paying up to 7.6% in interest per year. We we are paying millions of pounds per year, to the banks, rather than spending that money on services to our residents"

I was pleased to hear on the programme Rob Whiteman, the CIPFA Chief Executive (which is the professional accountancy body for local government) made it clear that Council should actively consider suing the banks. Whiteman (a former Chief Executive of  next door Barking & Dagenham Council) said that councils could consider suing banks over the issue.

He said, “If councils have made bad deals I think they should not be defensive about that but go to litigation and challenge the banks and say, ‘We think we have been mis-sold’, or, ‘We think there are bad deals here and we want to change the nature of the deal’.

“It is very difficult for banks to defend what may be demonstrably a bad deal and so I see no reason at all why councils shouldn’t try and remedy this through the courts if that is the right thing to do.

He did however couch his remarks with caution about making sure there was a proper legal case before spending money on suing the banks.

This is what Newham Councillors including myself, Cllr Roksana Fiaz and Cllr John Whitworth have been saying for years.

Apparently, it was the Bank's sale teams who coined the term "LOBO" and these City traders who earned millions in commission had a great laugh at our expense that they were really wolves ripping off local government treasury teams. Who had forgotten this biblical warning:-

Matthew 7:15:
"Beware of false prophets, which come to you in sheep's clothing, but inwardly they are ravening wolves".
Posted by John Gray at Saturday, February 17, 2018