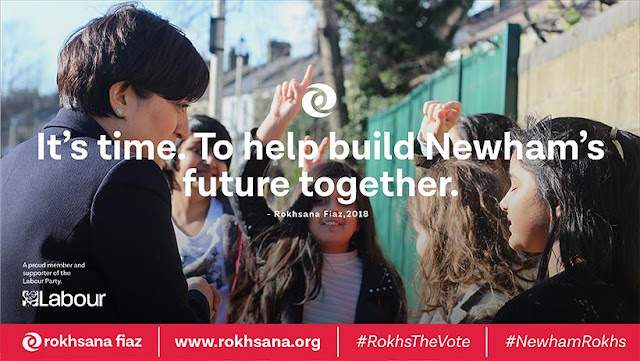 I spent this evening alternating from delivering #NewhamRokhs leaflets in the freezing cold and snow to sitting in an over warm campaign office stuffing envelopes and attaching labels.

There was an absolutely fantastic effort by dozens of Labour Party members from all over Newham (East Ham and West Ham CLP) to sort and deliver our second leaflet to members.

The vote is supposed to start from tomorrow (Thursday 1 March). All members deemed eligible to vote should receive a letter from London Labour Party with instructions and code numbers on how to cast their vote on the internet. I must admit to have some personal concerns about eligibility & this internet process but lets see what happens.

Yesterday, there was in East Ham the first of two hustings. After a rather macho & at times unpleasant speech and Q&A by candidate, Robin Wales, who was making unnecessary & snide comments about his opponents. It is was a refreshing pleasure to hear Rokhsana explain her vision & answer questions openingly and starting with what "We" could achieve collaboratively if she was Mayor. Not the "Me", "Me" and more "Me" from her opponent.

The selection will finish on Friday 16 March.