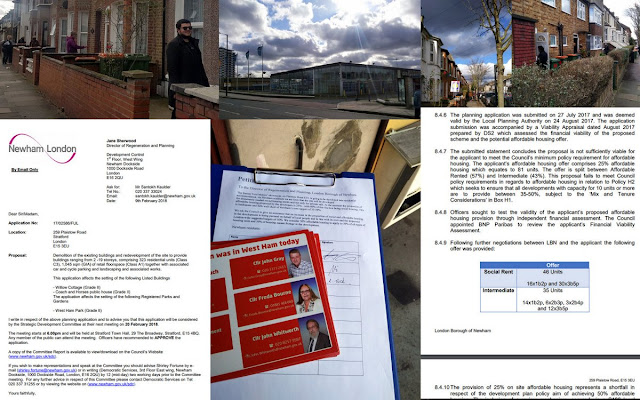 Picture collage from last Sunday when I was with Cllr John Whitworth and a West Ham CLP Labour team campaigning in my ward, West Ham. We were again asking for signatures for a branch petition calling for more social housing on the proposed development of the former Ford Car showrooms in 259 Plaistow Road, E15. Every resident I spoke to signed the petition.

There is a meeting of the Newham Council Strategic Planning Committee this Tuesday 20 February 2018 at 6pm at the Old Town Hall in Stratford to decide on the application.  Councillor Whitworth and I have asked for speaking rights on opposing the application. Other local Party activists are also attending.

I am really disappointed that Council officers have decided to recommend that the committee accepts the developers offer of only 25% of the development being for so-called "affordable" homes and not the 35-50% required according to the Newham Plan and the 50% requirement according to the GLA London wide (draft) plan.

This is a significant development with 323 homes proposed.

“Dear Deirdra, In response to your letter to residents, inviting them to comment on the application to develop the 259 Plaistow Road site, we as ward councillors would like to state that we will only support this application if the Assessed in Section 8 of the report. London Borough of Newham,259 Plaistow Road, E15 3EU proportion of agreed affordable housing is in the 35-50% range and that 60% of this is social housing. This is, of course, a requirement of Newham’s housing policy. We believe that we reflect a strong feeling in the ward and beyond that this site should yield a large number of much needed social housing units.

Thank you for your attention.
Regards,

While I understand that that there are legal restrictions on what Council officers and planning committees can consider in such applications, I think it should be rejected and the developers told to go away and come back with a fresh proposal with far more social housing to be included. I believe that the developers will face very significant local opposition including lawful direct action if this does not happen.

Check out my previous post here  and there is still time to sign the on line petition
Posted by John Gray at Sunday, February 18, 2018