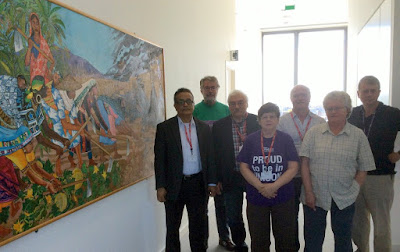 Guest speaker, Dr Francisco Dominguez, Secretary of the Venezuela Solidarity Campaign, spoke on the situation in that country, in Brazil, and in Latin American in general, and Marcos Garcia from the Venezuelan Embassy also spoke to the committee.

Francisco outlined the background of Latin American economies and their nature as raw material-exporting countries.

As the Committee had never previously considered the situation in Brazil, this was of particular interest. Francisco pointed out that the Workers Party candidate Djima Rousseff was elected as recently as 2014 by 54 million ‎votes, yet deposed by 61 senators.

Whilst corruption is endemic in Brazil, among the senators who removed her, many of them have corruption investigations continuing against them, one with as many as 47 separate investigations. The incentive for them to impeach Rousseff was to protect their own skins. One of the first acts of the post-Rousseff government was to end the contracts of the 10,000 Cuban doctors working in the country.

A further reason for the removal of Rousseff was the prospect of the hugely popular Workers Party candidate Lula, being re-elected President following Rousseff, which would have meant that reactionary parties would have been out of power for at least 24 years.

In Venezuela, Chavez when elected in 1999 was surrounded by every country in Latin America save Cuba being close to the US, and operating neo-liberal economies. The steps he took to deal with the massive levels of poverty, up to 80% of the population being impoverished, were tremendous. Being Chilean, Francisco is well aware of the ways in which hoarding and withholding of foodstuffs and other necessities can be used as economic and political weapons, which is precisely what is now happening in Venezuela.

Venezeula's great blessing and curse is the availability of oil, so abundant that it is cheaper than water, whereas in neighbouring Columbia it is the most expensive in the world, leading to a contraband market which further destabilises the Venezuelan economy. This situation was exacerbated by Obama's decision to categorise the country as a potential enemy by executive order. It is not accurate to describe the economy as in chaos, despite the collapse of the price of oil.

Venezuela's international role has been recognised by its election to the UN's Human Rights Committee, as well as it central role in ALBA, CELAC and many other international organisations, as well as playing an important role in the Columbia peace process.

Francisco explained VSC's media action programme, of which BIRO's are regularly appraised, which is designed to rebut the most flagrant examples of media bias.

He also explained a future visit of the Bolivarian Trade Union Centre to Britain.

Francisco explained something of Argentina's experience of neo-liberal economics, which created 1.4 million poor people in a very short period of time. Neo-liberalism in (Latin) America is a far harsher model than that experienced in Europe.

It is felt that either outcome of the US Presidential election will be negative for Latin America, as foreign policy is not entirely governed by the President (and US Presidents are mindful of the example of John Kennedy). The US is responsible for 47% of world military expenditure (down from 52% five years ago, due to the slow collapse of the US economy).

Marcos expounded further on the role of Trade Unions in Venezuela, and on the forthcoming visit‎ to Britain of the Venezuelan equivalent of the TUC.

Francisco outlined plans to establish a support organisation for Brazilian solidarity. The President of the ITUC is currently Brazilian.

Neo-liberalism is possible in many countries only with the presence of an Allende.

The Committee was appreciative of the knowledgeable and extremely informative presentations given".
Posted by John Gray at Thursday, November 10, 2016